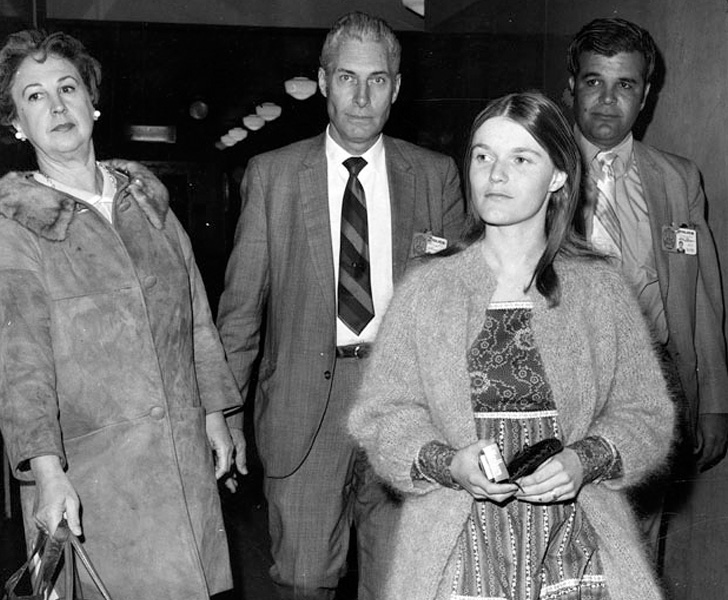 LOS ANGELES, Feb. 24 – The girl whose testimony led to the conviction of cult chieftain Charles Manson and three of his girl followers for the Tate-LaBianca murders took the witness stand in Los Angeles Superior Court again today to contradict the “confessions” of the three girl defendants.

Twenty-one-year-old Linda Kasabian, on the stand for 18 days during the guilt phase of the marathon trial, testified today she did not discuss the arrest of Manson “family” member Robert Beausoleil nor ways of getting him out of jail.

(The three convicted murderesses — Susan Atkins, Patricia Krenwinkel and Leslie Van Houten — all testified that they had discussed Beausoleil with Mrs. Kasabian and that it was her idea to commit copy-cat killings in an attempt to free Beausoleil. Beausoleil had been arrested in the murder of Topanga Canyon musician Gary Hinman two weeks before the Tate killings. Writings in blood were found on the walls of Hinman’s home.)

“The bodyguards put a lot of fear into me,” she said, “so I started thinking somebody might want to kill me.” She admitted however that there had been no attempts on her life while she was in California or while she was living in New Hampshire with her husband and two children.

Contradicting the testimony of the three girl defendants again, Mrs. Kasabian said that no one had taken LSD on either the night of the Tate killings or on the following night during the killings of market owner Leno La Bianca and his wife, Rosemary. She admitted however that Charles “Tex” Watson was under the influence of “maybe speed” the night the LaBiancas were killed. She said that Watson, who has yet to face trial on the murder charge, was “pretty wild” during the Tate killings but was “pretty quiet” on the second night of slaughter.

Tuesday, a rare turnabout placed Manson’s chief prosecutor in the witness chair, and while there, he conceded that he now seeks defendant Atkins’ life although he obtained Manson’s indictment by promising to spare her.

Dep. Dist. Atty. Vincent Bugliosi unexpectedly took the stand during the defense portion of the penalty trial in the Tate-LaBianca murders and described the “deal” he made with Miss Atkins for her testimony before the County Grand Jury.

Her testimony led to the indictment of Manson and four of his family members in addition to Miss Atkins.

That her testimony led to the arrest of the others had no bearing on his revised decision to seek the gas chamber for the 22- year-old admitted murderess, he said. He also is seeking execution of the other three involved — Manson, Miss Van Houten and Miss Krenwinkel. The fifth person charged with the murders, Charles “Tex” Watson, has yet to face trial.

Earlier Tuesday, Miss Van Houten testified she was “obsessed” with the knife in her hand at the time of the killings and continued to slab her victim “over and over and over again.”

“I was obsessed with the knife. Once it went in, it just kept going in and in and in. I figured she was dead when we left the house.”

The 38-year-old housewife-victim had been stabbed 41 times. Her husband was also killed by stab wounds.