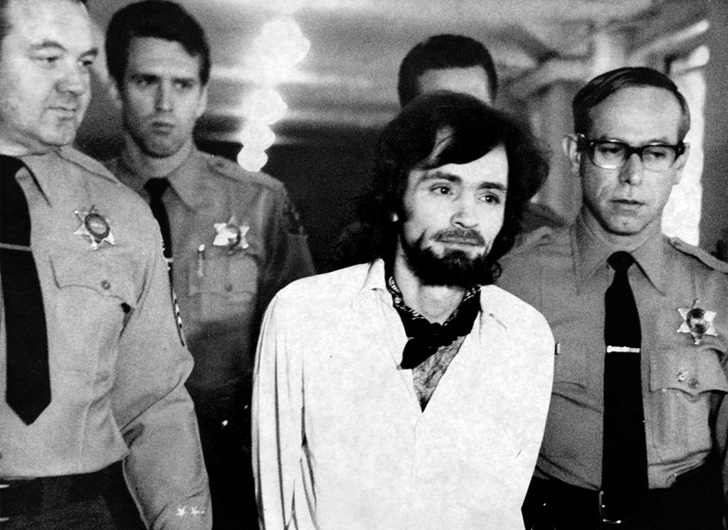 Sheriff’s deputies escort Charles Manson to court today, where he along with Susan Atkins, Leslie Van Houten and Patricia Krenwinkel were found guilty of first-degree murder and conspiracy in the Tate-LaBianca killings

The penalty phase of the trial to decide whether Manson, 36, Susan Atkins, 22, Leslie Van Houten, 20, Patricia Krenwinkel, 23 – will receive life imprisonment or death in the gas chamber will begin Thursday.

The seven-man, five-woman jury notified Los Angeles Superior Court Judge Charles Older in chambers at 10:15 a.m. today that they had reached a verdict – 42 hours and 40 minutes after their deliberations began Jan. 15.

Manson sat stoically as Court Clerk Gene Darrow read the lengthy 27 counts against him and his three disciples. He only spoke out once as the judge instructed the jurors to be taken from the room following the verdict.

“How come I’ve not been allowed to put on a defense?” he shouted as the jury filed from the room.

The traditional three buzzes, a signal that a verdict was reached, never sounded in the eighth floor courtroom of the Los Angeles Hall of Justice. Only one buzz sounded, indicating the jury had a question. When bailiffs went to the ninth floor deliberations room they were notified that a verdict had been reached.

Bailiffs then told Judge Older, who was conferring in chambers with two of the four defense attorneys, and one of the three prosecutors, Dep. Dist. Atty. Donald Musich.

The jury filed into the courtroom at 11:40 a.m., most of them smiling and glancing at the defendant. Two of the girls wore ribbons tying back their long hair, but were drably dressed in prison uniforms. Manson wore a white shirt with a black scarf tied around his neck.

Thirteen deputies surrounded the defendants and the attorneys as the clerk nervously read the verdict into a hand microphone. Manson at first stared at the judge then diverted his eyes to the jury and began rocking back and forth in his chair rubbing his beard.

Only once did the girls whisper to each other, something which was common during the marathon trial. Miss Atkins leaned over to whisper to the other two girls when the first “guilty” verdict was read regarding Miss Krenwinkel.

The jury was asked as a body if this was their verdict after each count was read. Then, at the close, the jury members were polled individually – all responding with a definite “Yes, it is.”

The four “family” members were charged with the brutal massacre of five people at the home of actress Sharon Tate and the killing the next night of market owner Leno LaBianca, and his wife, Rosemary, in their Los Feliz area home.

Prosecutors pointed out during the seventh-month trial that, on Manson’s orders, four of his “followers” invaded the actress’ exclusive Benedict Canyon home in the early hours of Aug. 9, 1969, to kill everyone inside.

The four – Charles “Tex” Watson, Linda Kasabian, Patricia Krenwinkel and Susan Atkins – murdered to launch “helter-skelter,” a black-white race war which Manson wanted to expedite, prosecutors said. Two of the four were not on trial; Mrs. Kasabian turned state’s witness in return for immunity and Watson has been adjudged insane and is at Atascadero State Hospital.

Mrs. Kasabian, who was on the witness stand for 18 days, said that 18-year-old Steven Parent, visiting the Tate home caretaker, begged for his life when the black-clad invaders halted his car as he attempted to leave the estate. Watson shot him four times in the head, Mrs. Kasabian testified.

Mrs. Kasabian sobbed uncontrollably as she told a jammed courtroom of the screams coming from the secluded home as, she testified, her three former friends almost butchered the four victims.

Mrs. Kasabian, now living with her two children in New Hampshire, described how she looked into the eyes of the bloody and dying Frykowski as he stumbled out of the murder house, chased by Watson. She said Watson caught him and then beat him with the butt of a gun as he fell on the lawn surrounding the fashionable home.

Frykowski’s girl friend, Mrs. Kasabian testified, also dashed from the house in an attempt to elude the murderers but was caught on the lawn by Miss Krenwinkel.

The actress, whose film director husband, Roman Polanski, is noted for his macabre movies was found with a rope around her neck in the living room of her home. The other end of the rope was tied around the neck of Sebring. A hood had been placed over his head.

One hundred and two stab wounds were found in the bodies of the four victims. Frykowski and Sebring also were shot.

The slayings at the Tate home were followed less than 24 hours later by the savage killings of the 41-year-old market owner LaBianca and his wife, 38.

Mr. and Mrs. LaBianca, also brutally stabbed, similarly had cords tied around their necks. A hood also was placed over LaBianca’s head.When found by officers, LaBianca had a knife protruding from his throat and a barbecue fork stuck in his stomach, where the word “war” had been carved.

Mrs. Kasabian’s testimony indicated that Manson himself headed the group of killers the second night but sent only three of his followers into the home to kill – Watson, Miss Krenwinkel and Leslie Van Houten.

The witness said that Manson entered the home first, tied up the couple, telling them they would not be hurt if they remained quiet. He then sent his clan members into the house to kill them as he drove away with Mrs. Kasabian, Miss Atkins and Clem Tufts, another family member, the witness testified.

Before the LaBianca home was selected as the murder scene, Mrs. Kasabian testified, Manson drove around looking for victims, stopping at two homes and a church in Pasadena before ending up at the LaBianca residence.

Police investigators had become almost stalemated in the hunt for the killers until Miss Atkins, arrested for another murder, “confessed” to a cellmate at the Sybil Brand Institute.

Manson and Miss Van Houten were arrested in Inyo County when sheriff’s officers raided his “family’s” desert home. Manson had moved the clan from the Spahn Ranch in Chatsworth a few weeks after the killings.

Miss Krenwinkel was subsequently arrested in Mobile, Ala., and Mrs. Kasabian was arrested in Milford, N.H. Watson successfully fought extradition for 10 months following his arrest in McKinney, Tex.

The marathon trial began June 15, and a month and 141 persons later, a jury was seated,

From the time the opening statement began July 24 until the trial concluded Jan. 15, the courtroom was filled with the unexpected.

Manson and his girls were periodically ejected for being disruptive, and during all of the summation, which lasted almost three weeks, the defendants were not in court.

Early in the trial the chief prosecutor, Dep. Dist. Atty. Aaron Stovitz, was “fired” from the case for making a comment to the press. Shortly thereafter Miss Van Houten fired her attorney, Ira Reiner, and replaced him with novice attorney Ronald Hughes.

Hughes disappeared during the Thanksgiving holidays and is presumed buried under mudslides in the Sespe Hot Springs area near Ojai. He was replaced, over the objections of Miss Van Houten, by Pasadena attorney Maxwell Keith.

Only one member of the original jury was replaced by an alternate (because of a medical problem) since the trial began.

President Richard Nixon, in a speech to law enforcement people in Denver, made the statement that he felt that Mason was “directly or indirectly responsible” for the murders.

Newspapers headlined the fact, and Manson in court the next day disrupted the trial again by showing the headline of a Los Angeles newspaper – “Manson Guilty, Nixon Declares” – to the jury as his girls chanted “If the President thinks we’re guilty, why go on with the trial?”

Manson’s activities in court have kept both spectators and jurors attentive. He appeared at the start of the trial with a cross carved into his forehead. He later attempted to attack the judge with a pencil, and he has been outspoken not only in court but from a holding cell adjacent to the courtroom.

The three girls have similarly been disruptive as they followed Manson’s lead, at one point feigning crucifixion. They have raised their arms in a Nazi salute and struck deputies who attempted to calm them.

During one disruption, Dep. Dist. Atty. Vincent Bugliosi, who took over as chief prosecutor when Stovitz left, took a swing at one of the defendants and swore at her during a disruptive phase of the proceedings.

Even spectators have got into the act. Two women, one a free lance artist and the other an apprentice witch, were thrown in jail for speaking out from spectators’ seats. One claimed she came to “defend my brother.” The other claimed she had proof the prosecution had bribed, coerced and threatened witnesses.

But the two girl spectators haven’t been the only ones cited. Three defense attorneys served time in jail for contempt, and Bugliosi was fined for the same offense.

As the trial slowly proceeded, Manson was indicted by the county grand jury for two other murders – that of Topanga Canyon musician Gary Hinman and Spahn ranch-hand Donald “Shorty” Shea. Both cases are expected to be discussed during the penalty phase of the trial.