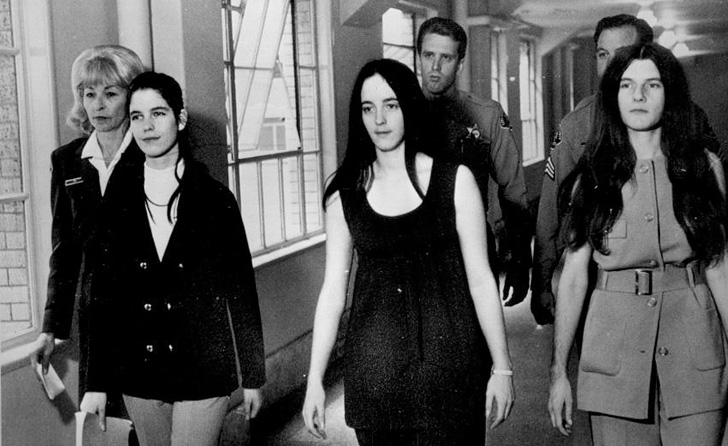 Three girl defendants in the Sharon Tate murder trial, Leslie Van Houten, Susan Atkins and Patricia Krenwinkel, from left, leave court Thursday after defense attorneys rested their case in a surprise move without calling any witnesses. Immediately the girls rose and said they wanted to testify, claiming it a constitutional right.

LOS ANGELES, Nov. 20 – The three female defendants in the Tate murder trial defied a move by their attorneys Thursday to rest the defense case without calling any witnesses and insisted they should testify.

The three lawyers for Susan Atkins, Patricia Krenwinkel and Leslie Van Houten immediately refused to ask the young women a list of questions the girls had drawn up themselves, despite the formal order of Superior Court Judge Charles H. Older to do so.

The 19-week old trial of Charles Manson and the three women was brought to an impasse by the conflict between the defendants and their counsel. Older recessed the proceedings until Friday in an attempt to work out some alternative.

In a startlingly unexpected development, chief defense attorney Paul Fitzgerald announced Thursday morning that the defense was resting its case for all four defendants without producing any witnesses or evidence in rebuttal to the prosecution’s charges that they were guilty of the seven Tate-LaBianca slayings.

While Manson himself remained out of the fracas, the three young women protested that they wanted to testify and went into Older’s chambers to insist that it was their constitutional right.

Older agreed and in the afternoon Susan Atkins, dressed in a royal blue, low-cut pant suit with bare arms, went to the witness stand and was sworn in.

Older instructed her attorney, Daye Shinn, to ask Miss Atkins a series of questions which she had written out in pencil on a yellow legal pad. Shinn flatly refused on grounds the answers to the questions would tend to incriminate her.

Older summoned the lawyers and the defendants into his chambers again and Fitzgerald and Ronald Hughes, the lawyer for Miss Van Houten, joined Shinn in a refusal to question their clients.

Fitzgerald told newsmen when the session broke up that it appeared the only alternatives were for the judge to hold them in contempt of court and send them to jail, or have them removed from the case and have new counsel appointed for the three girls.

He said the Judge had rejected the idea of asking the question himself.

Trial observers speculated that the three young women were prepared to incriminate themselves if it would exonerate Manson.

In the morning, defense attorney Paul Fitzgerald announced that the defense would rest its case without calling a single witness in the trial of Charles Manson and the three women for the Sharon Tate and LaBianca murders.

Miss Patricia Krenwinkel stood up and announced that she wanted to take the witness stand contrary to the tactic of resting the case. Superior Court Judge Charles H. Older summoned all the attorneys and defendants into his chamber to decide the next step to take.

In the judge’s chambers, Susan Atkins and Leslie Van Houten joined in Miss Krenwinkel’s appeal and said they too wanted to testify.

Fitzgerald said that Manson had not indicated he would take the stand but that, he was in agreement with the girls doing so. The defense lawyer said the girls proposed that Miss Atkins testify first, Miss Krenwinkel second and Miss Van Houten third with no other witnesses to be called.

“That would be the sum total of the defense,” Fitzgerald said.

Fitzgerald said the decision of the girls to testify was in direct violation of the advice of their counsel.

The rapid-fire developments in the 19-week trial came after Judge Older had rejected motions by the defense for directed verdicts of acquittal on grounds the state had not produced sufficient evidence to back up the testimony of its key witness, Linda Kasabian.

Fitzgerald had argued that Miss Kasabian, whose story was the base for the state’s case, herself had participated fully in the slayings and under California law was a full accomplice. He said the testimony of an accomplice must be backed up by substantial additional evidence or testimony and that the state had not done this.

Older then ordered the jury brought into the courtroom and formally asked deputy district attorney Vincent Bugliosi if the state rested its case. Bugliosi replied that it did.

There was a stunned silence in the courtroom for a moment and then the three other attorneys rose to affirm that their clients aiso were resting the case.

Miss Krenwinkel then rose to her feet and said aloud, “I wish to testify.”