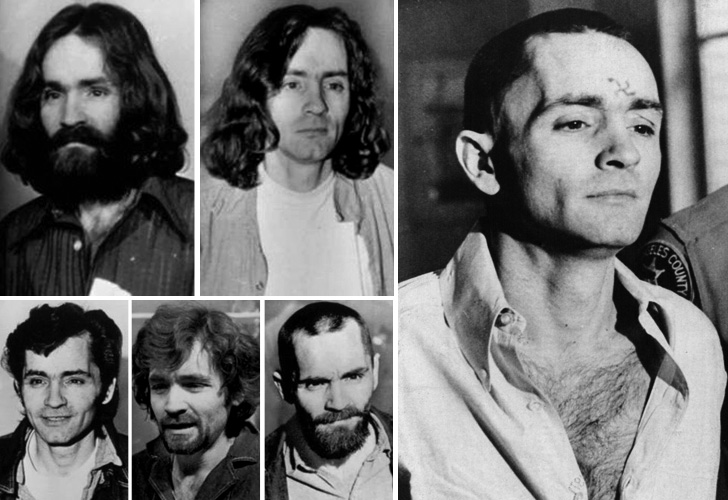 THE FACES OF MANSON -The many faces of Charles Manson, defendant in the Sharon Tate murder trial, are pictured since his arrest in 1969. He first shaved the beard, then cut his hair, grew the beard again and finally yesterday turned up in court (right) clean shaven, with a crew cut and a swastika scratched on his forehead

LOS ANGELES, Mar. 12 — Charles Manson was warned today by the judge in the Sharon Tate murder trial that if he injects any further comments while witnesses are speaking he’ll be ejected from court.

The admonition from Superior Court Judge Charles H. Older came after Manson began muttering during testimony by a court stenographer who recorded portions of a confession by Susan Atkins before she came to trial as one of Manson’s co-defendants.

The witness, Carmela Ambrosini, said that one of Miss Atkins’ lawyers, Richard Caballero, tore up part of her shorthand notes after the interview with Miss Atkins in jail. However, she couldn’t remember the contents of the torn part.

“Who told her to lose her memory?” muttered Manson. The prosecutor objected and the remark was stricken from the official court record. Then Manson snapped, “I find it hard to give the court respect it doesn’t give itself.”

The judge then gave his warning.

Manson’s ire apparently was aroused because the torn section of the interview was alleged to have contained, according to her lawyer, a denial that Manson ordered the slaying of Miss Tate and six others. Other parties to the interview, including Caballero, have testified they don’t remember just what Miss Atkins said.

In a published confession Miss Atkins said that Manson was chief architect of the slayings. She has since denied that also.

Manson, who has been ejected from court before for outbursts, shouted at the previous session when he heard a report that the state would not have been lenient to him even if he had confessed in the case.

“You phony!” he shouted at Atty. Gen. Evelle Younger, who testified Thursday that he was unaware of details of the crime and had “studiously avoided” reading about it.

Younger, called a “phony snake” by Manson during one of the outbursts, said his memory was “hazy” on all aspects (if the case despite the fact it was “the bloodiest and most brutal crime ever committed.”

Younger said it was his decision to offer Susan Atkins her life for her testimony before the county grand jury.

He was district attorney when the murders were committed and was in office when Manson and the three girls convicted with him were arrested.

Younger said he never considered granting complete immunity to Miss Atkins, although she was responsible for the indictments of the other “family” members. His explanation:

“Because I think she has been involved in one of the bloodiest and most brutal crimes ever committed, and I couldn’t ever permit myself to continue in public office if I allowed her to go free.”

(Mrs. Kasabian was granted complete immunity for her testimony during the trial.)

Younger was not cross-examined by the prosecution.

Dr. Joel Hochman, a psychiatrist, was recalled to the stand late Thursday and extensively questioned.

He said he believed none of the girl defendants is now nor ever was insane. Two other family members and a court stenographer will be the final defense witnesses called and are expected to conclude their testimony today.

Only one rebuttal witness is scheduled by the prosecution.

Asked in Thursday’s testimony why he later reneged on the deal, Younger answered: “Somebody told me at some time that she was not telling the truth, or otherwise I wouldn’t have allowed them to seek the death penalty.”

He said he couldn’t remember when or where or who was involved in the decision. He admitted he did not read the entire grand jury transcript, did not hear tapes of Miss Atkins’ statements nor did he read any of the questions and answers given by the girl to his deputies preceding the grand jury session.