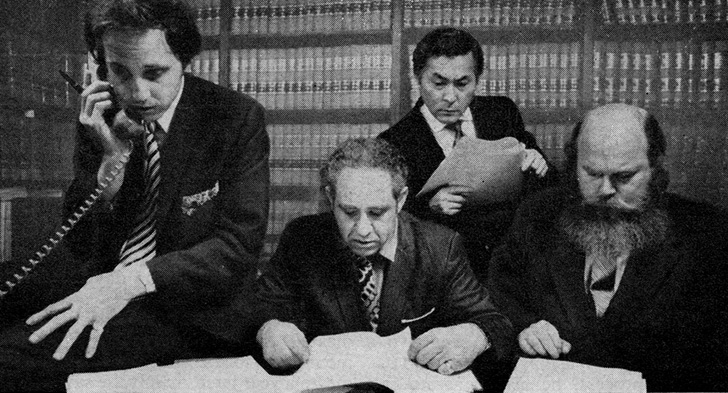 ATTORNEYS FITZGERALD, KANAREK, SHINN & HUGHES
No way to tell their clients what to do

Nov. 30 – For nearly four months, the prosecution methodically presented evidence in the bizarre Los Angeles murder trial of Charles Manson and his co-defendants. Last week the defense took over – and began with the stunning announcement that the defense rested.

Long buffeted by internal conflict, the four defense lawyers had finally agreed that the best defense was no defense. They had good reason. The three girls on trial with Manson had insisted that they were going to confess their part in the grisly Sharon Tate murder case. The lawyers wanted to stop them. Amid the confusion of legal argument, Manson himself won Judge Charles Older’s permission to take the stand outside the jury’s presence. “I’ve ordered no one to be killed. These children who come at you with knives; they’re your children. I didn’t teach them; you did.”

Mismatched Lawyers. From the outset, Manson clearly intended to make the trial his own show. He wanted no lawyers at all. When a judge decided that Manson could not properly safeguard his own procedural rights, the defendant considered more than 60 hopeful attorneys and perversely put together a defense as mismatched as the shards of his own personality.

First, there was Ronald Hughes, 35, who had casually met Manson a year earlier. A onetime conservative turned hippie, Hughes had flunked the bar exam three times before passing, and had never tried a case. Manson took him on after he agreed to grow a beard. Now the amiable Hughes talks of quitting law and becoming a character actor. Manson brought in Irving Kanarek, 52, whom he regarded as the most obstructionist and time-consuming lawyer in Los Angeles, in hopes of badgering the judge into allowing him to defend himself. When the judge continued to refuse, Kanarek proceeded to exasperate even Manson with a blizzard of objections. The third member of the courtroom team was Daye Shinn, 53, a former used-car salesman of Korean descent, who specializes in immigration cases for wealthy clients seeking Mexican maids. Manson took him on mainly to handle movie, record and publishing rights.

Arrayed alongside this unusual trio – and occasionally against it – was Paul Fitzgerald, 33, assigned by the public defender’s office and one of its best men. Although he was the unofficial leader of the umbrella defense, Fitzgerald was often undercut by his colleagues as well as the defendants. He usually cross-examined prosecution witnesses first, then had to watch in agony while Hughes and Kanarek clumsily plowed his points under. Kanarek in particular sometimes left a prosecution witness sounding more impressive than when he started. With bitter frustration, Fitzgerald said, “It’s like living in a concentration camp.”

The toughest part was living with Manson. Enraged when the judge called him “incompetent” to run his defense, and well aware that the climate against him was overwhelming, Manson weeks ago devised a weird ploy that no lawyer, even a bad one, could abide. The guru determined that the girls from his “family” should take the stand, sweetly confess all and say that he had nothing to do with it. Then Manson would testify, both to confirm his innocence and tell the world his special truths. Fitzgerald vainly argued the obvious; not only would the girls be convicted, but Manson would damn himself by demonstration the prosecution’s contention that he has mesmerizing power.

Nonetheless, the girls went along with obedient enthusiasm. But then Lawyers Hughes, Kanarek and Shinn surprised perhaps even themselves. They all agreed with Fitzgerald that their duty to their clients lay in keeping them off the stand.

No Questions. Just like everything around Manson, their effort seemed doomed; the judge ruled that the girls had a right to testify. When the lawyers refused to ask questions, the jury was removed so that the girls could tell their stories, after which the inadmissible portions were to be edited out. The girls refused to testify without the jury.

At that point, Manson sprang up, asked to take the stand and delivered 90 minutes of extraordinary sermonizing about himself and society in general. When he finally finished, he whispered to the girls that they now should not confess. Then, apparently satisfied he had reached the audience he cared about, Manson said he would not repeat any of his testimony for the jurors. So they will not hear any defense witnesses after all. The attorneys, if they can find any pieces to gather, will present final arguments next week.

Sometimes in tears, sometimes in anger, most often with restrained sincerity, Charles Manson told his story to the court. Excerpts from his testimony:

“I have stayed in jail and I have stayed stupid, and I have stayed a child while I have watched your world grow up, and then I look at the things that you do and I don’t understand. Most of the people at the ranch that you call the family were just people that you did not want, people that were alongside the road; I took them up on my garbage dump and I told them this: that in love there is no wrong.

“I have done my best to get along in your world, and now you want to kill me. I say to myself, ‘Ha, I’m already dead, have been all my life.’ I may have implied that I may have been Jesus Christ, but I haven’t decided yet what I am or who I am. But what you want is a fiend: you want a sadistic fiend because that is what you are. You only reflect on me what you are inside of yourselves, because I don’t care anything about any of you. If I could, I would jerk this microphone off and beat your brains out with it, because that is what you deserve. You kill things better than you, and what can I say to you that you don’t already know?

“I don’t care what you do with me. I have always been in your cell. When you were out riding your bicycle, I was sitting in your cell looking out the window and looking at pictures in magazines and wishing I could go to high school and go to the prom. My peace is in the desert or in the jail cell, and had I not seen the sunshine in the desert, I would be satisfied with the jail cell much more over you society.”