TOKYO, Nov. 22 – Clairvoyant Peter Hurkos said Wednesday the grisly Sharon Tate murder case will be broken soon and that three persons police are seeking may be trapped by evidence he first envisioned during a harrowing psychic search at the scene of the crime.

Hurkos, on a USO tour of military hospitals in Japan, the Philippines and Guam, told how he was called off a successful piece of psychic detective work to be put through his most stressful times since the day he woke up in a Dutch hospital and found he could identify one fellow patient as a thief and another as a British agent about to be killed by the Gestapo.

“I wanted to get away from the Tate case,” Hurkos told Pacific Stars and Stripes. “I had to get away. That’s why I came over to see the boys.”

Five persons had died — Miss Tate, Sebring, heiress Abigail Folger, 37-year-old Voityck Frokowski and Steve Parent, 18. Using psychometrics — touching objects to resurrect events associated with them — Hurkos said he walked from room to room “touching everything, the couch and even the bed she slept in.” He sat on the floor of the living room for 20 minutes to get a “mental picture.” It appeared.

Hurkos said he could envision a bizarre quiz game in which the contestants were asked the last time they had sexual relations. The person admitting the longest lapse was hung from an overhead beam and beaten. Suddenly, Hurkos said, someone on a bad LSD trip saw “a vision of the devil” and went berserk — firing shots to begin an orgiastic murder that ended with knives, involving three killers and five victims. Hurkos said the victims were in a drugged stupor and could not resist.

Hurkos said he found a pair of horn-rimmed glasses that belonged to one of the killers. He said he saw other scenes, other parties — and got a mental picture of two important pieces of evidence that were in the hands of an entertainer who was not at Miss Tate’s last party but had attended others.

Hurkos said the entertainer was unwilling to surrender the evidence because he feared the killers, but that he (Hurkos) believes the police have it now. The entertainer is out of the country, Hurkos said — perhaps afraid. He described the evidence in detail but asked that it not be revealed because this could alert the killers and damage the case. “We want to get them to court,” Hurkos said grimly.

Hurkos said police have the names of the suspects — along with the descriptions that flashed into his brain. Who are they? Where are they? Are they prominent personalities or show business figures? 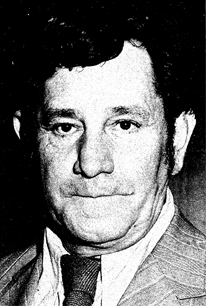 PETER HURKOS: “Something Will Break Soon”

“I can’t tell you that,” said Hurkos, smiling thinly. “The police have done a great, great job. Something will break soon.”

Hurkos said he worked around the clock on the case and lost nine pounds in a psychic investigation that allowed him only two hours of sleep a night. “It was with me day and night,” the 58-year-old Hurkos said. “It always is. I’d be the most happy man in the world if I could turn it (his clairvoyance) off — use it only five or six hours.”

Hurkos, who has helped police in 17 countries solve crimes and worked on the Boston Strangler case (“They’ve got the wrong guy”), told of how he came by his strange and terrifying gift.

Hurkos said he was living a day-to-day existence as a “sailor on the bum” when in 1931 he came back to his native Holland and went to work for his father, a house painter. The Germans overran Holland the next year. Hurkos said he was painting a rooftop when he fell from atop a 43-foot ladder, breaking his shoulder and fracturing his skull.

Rushed to a hospital in The Hague, Hurkos came awake after three days. He looked at the man in the next bed. “Before I knew what I was saying,” Hurkos related, “I looked at him and said, ‘You’re a bad man. You sold your father’s gold watch. You worked in a bank and robbed your employer.'” The frightened patient threw on his clothes and ran out. A nurse who reproved Hurkos was told she would lose a valise on a train. She already had.

A patient leaving the hospital stopped by Hurkos’ bed, shook his hand arid wished him well. Hurkos told him he was a British agent and in grave danger of being killed. He even named the place — Kalver Street. Two days later, the man — a Dutchborn British agent — was shot trying to flee Gestapo agents — on Kalver Street.

Shortly after he was released from the hospital and began giving readings as a medium, Hurkos said, a stranger in a light raincoat came and handed him a photograph. “Tell me something about him,” the stranger said. “He’s my brother.”

“He is not your brother and he is not Dutch,” Hurkos replied. “I see a German uniform.” The man in the photograph, a worker in the Dutch Underground, was tailed until he was seen going into German headquarters. Hurkos was right; the man in the raincoat had been sent to test him. Hurkos joined the underground, identified many Nazi infiltrators and turncoats, and wound up in Buchenwald concentration camp for 18 months.

Hurkos said he is not infallible but is “80 or 87 percent correct.” He recalled a case in Sweden in which he denied a father’s claim that his missing daughter was a runaway and told him he had killed the girl and buried her in the basement. The father refused to allow police to dig there. Hurkos said the girl’s remains were recovered from the basement 10 years later, when the father was out of reach of the law.

Just before the Tate case, Hurkos related, he worked on a murder case in Ann Arbor, Mich., in which six young women were killed. Taken to the general area of one murder, Hurkos said he accepted a policemen’s challenge to find the exact spot the body was found. He did — and also described the state of disarray and partial undress in which the corpse was found.

Hurkos said he went on television and gave his psychic description of the killer. Just after the telecast, he said, he got a phone call and a young male voice told him, “You damned bloodhound. If you don’t leave town, I’ll kill someone else.” Hurkos said he desperately held the caller on the phone as police traced the call and tried to capture the suspect at a bus station.

Hurkos said police later found a trailer he described as the property of the murderer and picked him up on a motorbike Hurkos had told them about. The suspect was later released — and arrested again when an uncle, a member of the police force, found bloody souvenirs of the killing in his basement.

In Tokyo, Hurkos shook the hand of a total stranger and said a few minutes later: “I didn’t see a father. You have not seen him since you were 12.” He was correct.

Walking through hospital wards and occasionally demonstrating his power, Hurkos told one young patient: “Why did you walk from the left side of the road to the right? Why didn’t you stay where you were safe? That’s how you stepped on that booby trap.” Right again.

Hurkos, traveling with his show business partner and wife, Stephany Courtney, recently appeared on a Los Angeles television show with a commentator noted for ripping his guests apart. He recalled Hurkos had once been divorced on grounds of mental cruelty and asked him if he had ever beaten his wife.

“No,” replied Hurkos. “But you did last week in the kitchen.” The flabbergasted commentator let it drop, Hurkos said.