Posted on December 9, 1969 by cielodrive.com 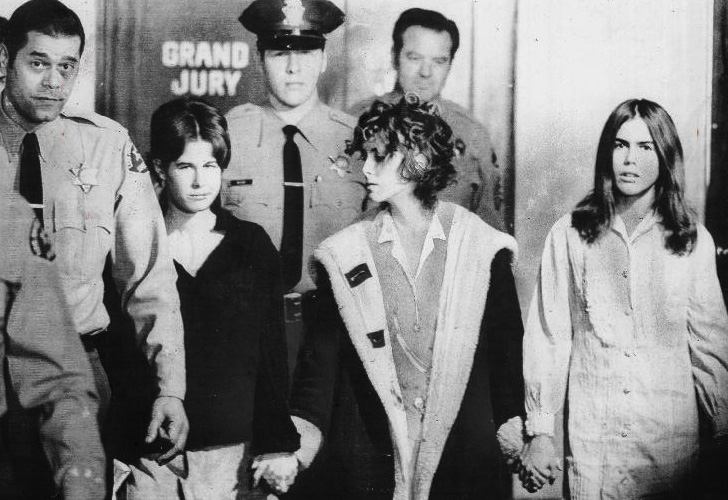 Three girls, all members of the Charles Manson family of hippies, leave the grand jury hearing room after testifying to their knowledge of the Sharon Tate murders. The three, (L-R) Diana Bluestein, Nancy Pitman and Rachel Morse, were arrested recently, along with Manson and others in his cult in Inyo County.

Although he would not reveal contents of the two-day secret hearing, the jury chairman — retired Long Beach businessman Joseph Bishop — termed the murders “shocking.” He singled out the testimony of Coroner Thomas T. Noguchi as particularly harrowing.

“You’ll find that this is one of the worst murders in the history of California,” the gray-haired Bishop told newsmen.

Indicted on seven counts of murder and one of conspiracy were:
— Charles Manson, the 35-year-old, hypnotic-eyed leader of the hippie clan charged with the murder. Manson, now in Inyo County jail on auto-theft charges, is believed to have masterminded the murders and actually participated in the murder of LaBianca and his wife Rosemary the day following the Tate massacre.

— Susan Atkins, the 21-year-old informant and former clan member who testified for two-and-a-half hours, implicating the five others indicted.

The girl is now in Sybil Brand Institute in Los Angeles. She was arrested in connection with another murder, also believed committed by the clan, that of 34-year-old musician Gary Hinman, whose badly mutilated body was found in his Topanga Canyon home July 31.

— Linda Kasabian, 20, arrested in Concord, N.H. The five-month-pregnant girl is believed to have waited outside the Tate home during the slayings, but actually to have participated in the murder of the LaBiancas.

— Patricia Krenwinkle, 21, now being held on a warrant from the Los Angeles district attorney in Mobile, Ala. The girl is fighting extradition.

— Charles Watson, being held in Copeland, Tex., also on a warrant from Los Angeles. Watson is believed to have been the “brawn” behind both the Tate and LaBianca killings and is allegedly the one who carried the .22-caliber pistol used in the Tate slayings which is now in the hands of police.

— Leslie Sankston, 19, now being held at Sybil Brand Institute where she was taken after her arrest in Independence on car-theft charges.

The 21-member grand jury deliberated less than an hour before returning indictments against the six defendants. They marched quietly from their sixth floor headquarters in the Los Angeles Hall of Justice to the eighth-floor courtroom of Superior Court Judge William Keene where the indictments were formally presented.

Final witnesses to appear before deliberations began were three girls — all material witnesses in the case — Nancy Pittman, 20, Rachel Morse, 18, and Diana Bluestein, 16. The girls, obviously frightened and one in tears, could not add much to the story already told jurors by the Atkins girl, Dep. Dist. Atty. Aaron Stovitz told newsmen. He called their testimony “not significant.”

He was antagonistic to newsmen who crowded the hallway leading to the jury chambers. He shoved several television cameramen and refused to answer any questions.

Most of the 15 witnesses appearing Monday were police officers, either investigating the cases themselves or in the scientific division of the department.

All the defendants except one are charged with seven counts of murder and one of conspiracy to commit murder: Only the Sankston girl is charged with two — that of the LaBiancas and the conspiracy charge.

The LaBiancas were similarly murdered the following night in the Silver Lake District of Los Angeles.