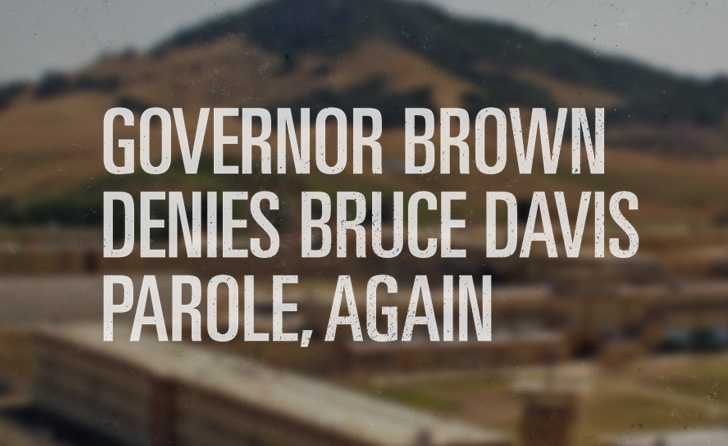 Davis is now 71 years old and has been in prison for over 43 years. I acknowledge Davis has made efforts to improve himself while incarcerated. He has not been disciplined for serious misconduct since 1980 and earned his Master of Arts and Doctor of Philosophy in religion from Bethany Bible College, graduating summa cum laude. He has been commended for his outstanding job performance, high personal standards, and excellent people skills. He has worked in the chapel for nearly three decades, teaches Bible study classes, and has moderated Yokefellows Peer Counseling since 1983. He has participated in self-help classes including Alcoholics and Narcotics Anonymous, Alternatives to Violence, and others. I commend Davis for taking these positive steps. But they are outweighed by negative factors that demonstrate he remains unsuitable for parole.

The exceptional brutality of these crimes and the terror the Manson Family inflicted on the Los Angeles community 45 years ago still resonate. The sentencing judge aptly noted that “these were vicious murders. They indicate a very depraved state of mind on the part of the defendant.”

Davis’s crimes were intended to fund and protect the cult and to trigger an apocalyptic race war. The Family planned a violent robbery of Gary Hinman because they believed he had money to fund the cult’s endeavors. Davis armed himself with a gun and drove others to Mr. Hinman’s home. Two days later, Davis and Manson were summoned for help. Davis pointed a gun at Mr. Hinman while Manson slashed Mr. Hinman’s face from ear to chin. The two left the others to continue to hold Mr. Hinman hostage in his own home while he bled profusely, and Beausoleil finally stabbed him to death and smothered him with a pillow. The Family used Mr. Hinman’s blood to write messages on his walls and left his body to decompose and rot. Two weeks later, other members of the cult carried out seven more horrific murders. Seventeen days after the Tate-LaBianca massacre, Davis, Manson, and others killed Mr. Shea because they suspected he was a police informant. They surrounded Mr. Shea, relentlessly beat and stabbed him, chopped up his body, and hid his remains. Davis finally admitted in 2012 that he sliced Mr. Shea from his armpit to his collarbone while the others stabbed Mr. Shea. Davis and Manson later bragged about the gory details of the murder. These crimes represent that “rare circumstance” in which the aggravated nature of the crimes alone is sufficient to deny parole.

The crimes alone, however, are not the only evidence that Davis is unsuitable for parole. Davis continues to paint himself as a passive bystander who took part in these appalling events because he was afraid of the repercussions of breaking away. He told the psychologist who evaluated him in 2013, “I was a dependent person. I needed attention and approval. I wasn’t my own person. I wanted sex, drugs, and rock ‘n roll.” He later continued, “I wasn’t looking out for my best interests; I was led by fools, bigger fools than myself.” Davis told the Board that he was willing to do “whatever it took” because he wanted to be “Charlie’s favorite guy.” He still maintains that he did not participate in the planning of the murders of Mr. Hinman or Mr. Shea.

Davis explained that he “deceived himself” by telling himself that it was “okay” as long as he did not actually “pull the trigger” to kill Mr. Hinman. He claims that he refused to go out on August 9 and 10, 1969 to participate in the Tate-LaBianca murders because “I didn’t want to be involved in something that could be physically confrontive.” He claims that he reluctantly participated in the stabbing of Mr. Shea because he was threatened by Manson and said that immediately after he “cut” Mr. Shea, “I looked around as if I hope you’re happy, threw down the knife and left. And that was a shock. That was a shock.” He said, “I felt terrible about it. I didn’t feel, of course, too terrible not to do it, because I was – I had – there was other considerations like what will happen if I say no.”

Davis’s explanations show he is still dodging responsibility for his active role in these murders. Each of the members of the Manson Family, including Davis, knew full well what the purpose and intent of the cult was— to prepare for and instigate Helter Skelter. Davis’s actions show that he, too, signed on to the plan and didn’t merely tolerate the violence of the others. Davis did not just “cut” Mr. Shea, he sliced Mr. Shea “from armpit to collarbone.” As I noted in my reversal last year, Davis bragged about murdering and dismembering Mr. Shea, stating “Yeah, when we brought him to now, Clem cut his head off,” adding, “That was far out.” Davis also bragged to Springer about dismembering Mr. Shea as a way to “tak[e] care of snitchers.” Although Davis did not participate in the Tate-LaBianca murders, those grisly crimes neither caused him to question his involvement with the Family, nor deterred him from participating in the brutal murder of Donald Shea weeks later. Davis then evaded capture for over a year, hiding in the desert with the other cult members. These are not the actions of a distraught and reluctant participant.

Davis was not simply a follower. At his sentencing, the judge stated, “I don’t want to give…the impression that Mr. Davis was at all a dupe…in these cases or simply a foil of Charles Manson.” The judge, who reviewed the facts of this case first-hand, observed that Davis was older and more educated than most of the other members of the cult and capable of independent judgment, and said “he shouldn’t be treated as somebody who was just led along by the nose and at the whim and command of Charles Manson. He’s a man who is capable of going on his own path and he deliberately chose to engage in these murders.”

My reversal of Davis’s grant of parole last year was based on the gravity of his offenses as well as his minimization of his role in these events. I noted that Davis was still revealing new details about the murders over 40 years later. I asked Davis to explain why he has shielded other Family members from prosecution by withholding information about these crimes, and to finally reveal what he knows. I asked him to reconcile his version of being a follower with the evidence that he was a leader who actively championed the Family’s values. He did not address these concerns at his most recent parole hearing. For the same reasons I articulated last year, I find that Davis is not suitable for parole.

I have considered the evidence in the record that is relevant to whether Davis is currently dangerous. When considered as a whole, I find the evidence shows that he currently poses an unreasonable danger to society if released from prison. Therefore, I reverse the decision to parole Davis.