Jun. 3 – California’s Attorney General will have until next Thursday to oppose Leslie Van Houten’s request for a copy of the Tex Watson tapes.

The 2nd District Court of Appeal is currently reviewing a petition of Habeas Corpus filed by Van Houten challenging the legality of Gavin Newsom’s reversal of her 2019 parole recommendation. Part of the petition requested the court order the Watson tapes be turned over to Van Houten’s attorney Richard Pfeiffer.

In a order issued today, the court requested that a transcript of the Tex Watson tapes be filed under seal along with a short brief opposing release.

The Tex Watson tapes are the earliest known documented account of the Tate-LaBianca murders. Recorded before any codefendant account had been made public, the tapes provide an uninfluenced look into the two nights of murder which Watson led.

Attorneys for Van Houten have sought copies of the tapes for the past six years, believing they contain information relevant to Leslie’s parole suitability. 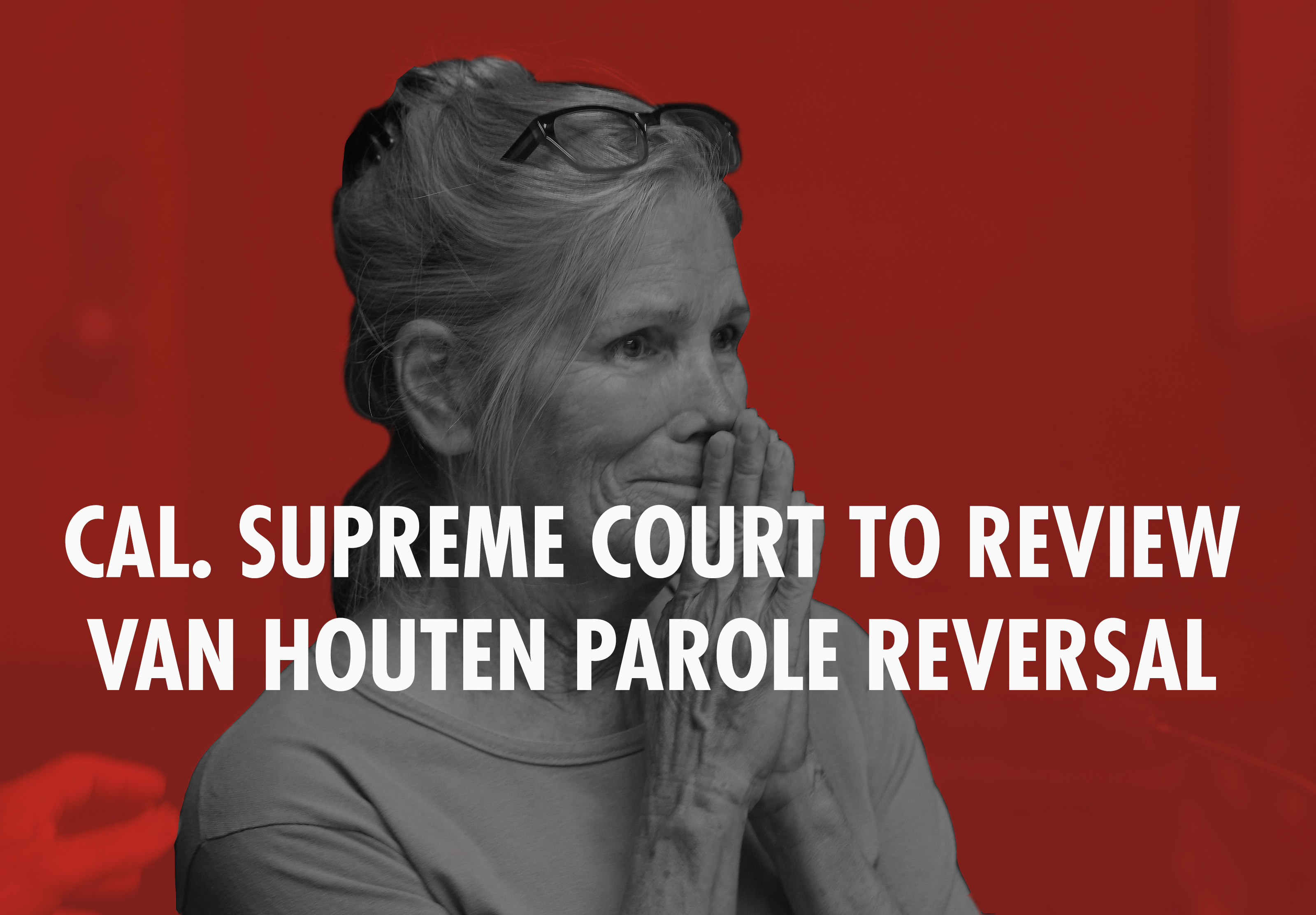 Jan. 8 – The California Supreme Court has granted a review of Leslie Van Houten’s 2017 parole recommendation reversal. Briefing will be delayed until a pending case cited in Van Houten’s petition is resolved.

Van Houten was found suitable for parole in September 2017. Then Governor, Jerry Brown, reversed the decision in January of 2018, citing the heinousness of the murders. Brown also accused Van Houten of downplaying her role in the murders, stating she had attempted to shift blame to Charles Manson.

Van Houten’s attorney, Richard Pfeiffer filed a writ of Habeas Corpus challenging Brown’s reversal, arguing the decision relied on isolated negative factors to support the conclusion that Leslie Van Houten posed an unreasonable risk if released. The Superior Court upheld Brown’s reversal in June of 2018, stating that the Governor had met all due process requirements.

Pfeiffer challenged the ruling in California’s 2nd District Court of Appeal. The appellate court granted review and heard oral arguments last April. In September, the three justice panel ruled 2-to-1 to uphold Brown’s reversal. Now the matter will be addressed by the state’s highest court.

Van Houten is also waiting on a Superior Court ruling due in the next few days, regarding Governor Gavin Newsom’s reversal of her 2019 parole recommendation.

The other three Family members remained at Mr. Hinman’s house for two more days while Mr. Hinman lay bleeding. Robert Beausoleil eventually stabbed Mr. Hinman in the chest and smothered him with a pillow, killing him. Inside the home, using Mr. Hinman’s blood, the group wrote the words “political piggy” and drew an animal paw print on the walls. Mr. Hinman’s decomposed body was found on July 31, 1969.

In August of 1969, Mr. Manson expressed his belief that Donald Shea, who worked as a ranch hand at Spahn Ranch, was a police informant and was working with a neighbor to have the Family removed from the ranch. Family members Mr. Manson, Mr. Davis, Steven Grogan, and Charles Watson lured Mr. Shea into a car with them. They drove Mr. Shea to a secluded area and stabbed him multiple times, killing him. Mr. Davis has acknowledged that he used a knife to cut Mr. Shea from his collar bone to his armpit during the attack.

Mr. Davis was arrested in December 1970, after evading capture for more than a year. He was convicted of two counts of first degree murder and conspiracy to commit murder and robbery.

I acknowledge Mr. Davis has made efforts to improve himself in prison. He has been disciplined only twice during nearly five decades of incarceration. He earned several educational degrees in prison, including a master’s degree and a doctorate. Mr. Davis has participated in many self-help programs, including Alcoholics Anonymous, Anger Management, and Alternatives to Violence. He has donated to charity and receives positive work ratings from his supervisors. I commend Mr. Davis for taking these positive steps. I also note that Mr. Davis is now 77 years old, and that the psychologist who evaluated him in 2016 concluded that “as he has aged he has shown less criminality and increased prosocial endeavors.” However, these factors are outweighed by negative factors that demonstrate he remains unsuitable for parole at this time.

Mr. Davis was part of one of the most notorious criminal cults in California history. He and his fellow Family members robbed, tortured, and killed many victims in Southern California in 1969. During his time on the ranch, Mr. Davis furthered the Family’s cult objectives – to start a race war and trigger the apocalypse – and participated in these two extremely calculated and violent murders to that end. It is difficult to overstate how impactful these crimes were on the people of California. They left a legacy of terror and pain that continues to haunt the state today.

In addition to the horror of these crimes, there is additional evidence that Mr. Davis should not be released from prison. I do not believe that he has demonstrated adequate insight into his willingness to engage in such extreme violence. At his 2019 parole hearing, Mr. Davis explained that he was initially drawn to the culture of “sex, drugs, and rock and roll” that surrounded Mr. Manson. He left California for about a year, then returned to Spahn Ranch and found that “[t]he whole scene had changed” and the discussions there had turned to race wars, riots, and disrupting society. Mr. Davis claimed that he did not believe that Mr. Manson sincerely held those beliefs, and that the first time he saw the Family’s vision being fulfilled was the torture and murder of Mr. Hinman. Mr. Davis acknowledged helping plan the attack on Mr. Hinman, and continuing to associate with Mr. Manson and the Family after learning of Mr. Hinman’s death. He also admitted that he stayed with the group even after finding out about the heinous Tate-LaBianca murders, during which five more people were killed by the Family. Mr. Davis told the Board, “[A]s long as I felt like Manson was my friend and that I was having affection from girls, and I could get loaded when I felt like it, nothing else really mattered.” He explained that he lacked empathy and simply did not care about the Family’s activities and ideology since his own “psychological” and “emotional needs” were being met. Mr. Davis acknowledged that he willingly participated in the attack on Mr. Shea, and that he knew in advance that Mr. Shea would be killed. He admitted cutting Mr. Shea, and said that “when it really came down, I didn’t care…if Mr. Shea had been alive or dead didn’t make any difference to me.”

None of Mr. Davis’s statements at his 2019 hearing indicate that he has a comprehensive understanding of how he came to participate in such extreme violence. As a result, I do not believe that he has the current insight and skills to abstain from violent situations in the future if released. A lack of empathy and a desire for drugs do little to account for Mr. Davis’s repeated and deliberate decisions to remain by Mr. Manson’s side, furthering the cult’s warped goals and actively engaging in violence. He has not sufficiently explained why he was so indifferent to the suffering and deaths of the victims of the Family, even as the cult’s body count continued to rise. Mr. Davis had ample opportunities to alert the authorities, personally intervene to stop these crimes, or even to just walk away. Instead, he escalated his own violent participation and deepened his connection to Mr. Manson, all in pursuit of his own “little personal gratification.” Until Mr. Davis can adequately explain the internal characteristics and decision-making that led him to these extreme actions, I do not believe he can be safely released.

I have considered the evidence in the record that is relevant to whether Mr. Davis is currently dangerous. When considered as a whole, I find the evidence shows that he currently poses an unreasonable danger to society if released from prison at this time. Therefore, I reverse the decision to parole Mr. Davis.