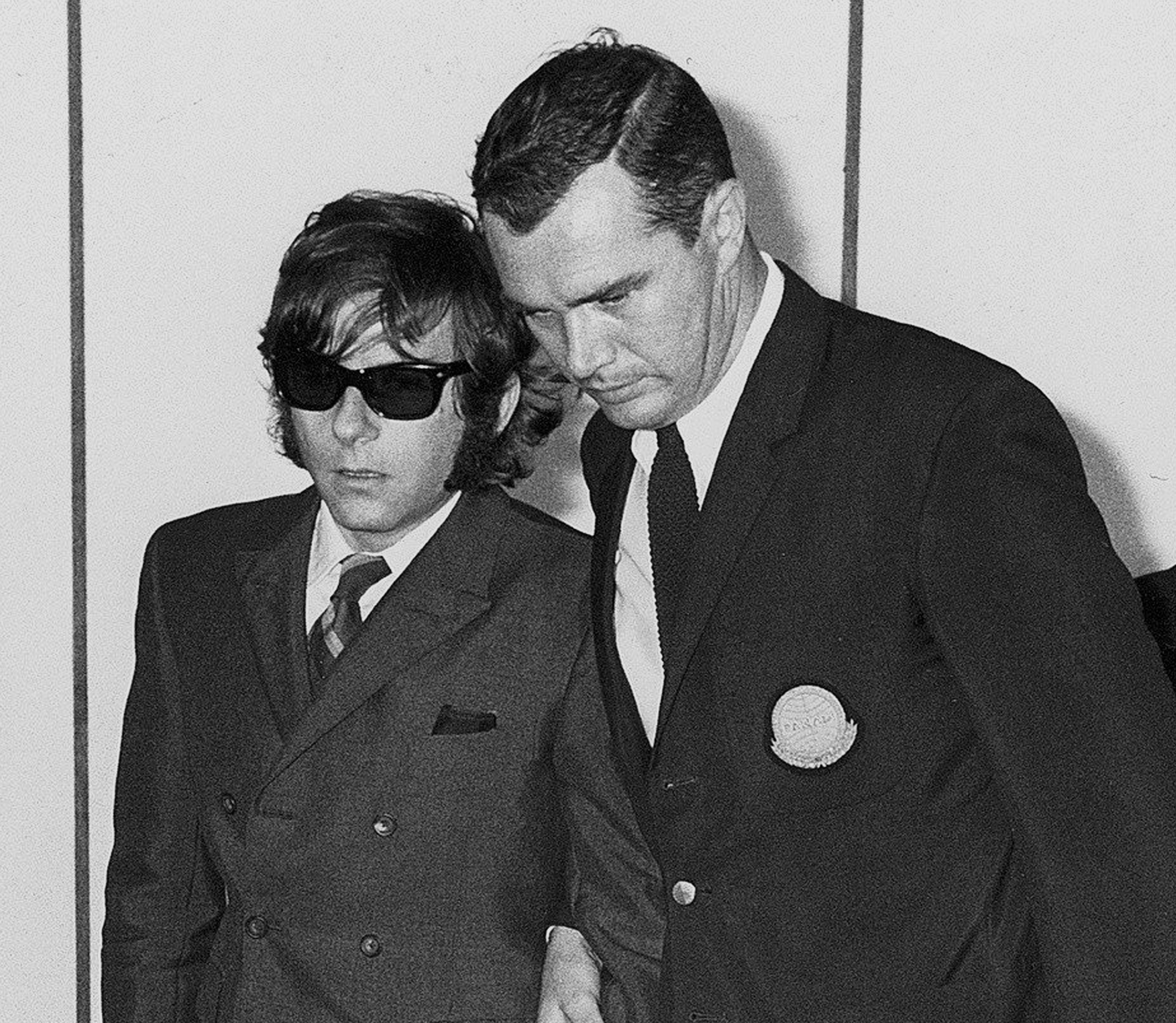 SAD JOURNEY – Roman Polanksi, husband of slain actress Sharon Tate, is escorted to plane in London. He avoided newsmen on his arrival here.

LOS ANGELES, Aug 11 – A Silverlake couple were found slain Sunday night under bizarre circumstances that police said may connect the crime with the murder of actress Sharon Tate and four others in Benedict Canyon.

News Broadcast Of The LaBianca Murders

The woman’s body, clad in pajamas, was found in the bedroom of the isolated single-story house at 3306 Waverly Drive, her back ripped to pieces by what police said may have been a knife or a whip.

They were not immediately identified.

The words “Death to Pigs” had been smeared on the door of the refrigerator, apparently by the heel of the slayer’s hand, dipped in his victims’ blood.

The couple’s teen-age children, returning home shortly after the crime was discovered at 10:30 p.m. immediately became hysterical and could give police no clear account of events earlier in the evening.

The hood, the bloody inscription – written in the same manner as the word “Pig” on the front door of Miss Tate’s rented home in Benedict Canyon – and the nature of the wounds all indicated a connection with the earlier crime, police said.

A second suspect in that case is still believed at large.

The second suspect is a man whose name was mentioned by William E. Garretson, a 19-year-old caretaker at the estate who was taken into custody shortly after the murders were discovered.

Garretson underwent an hour long lie detector test at central police headquaters Sunday afternoon. He was then returned to his cell, and Sgt. Jesse Buckles explained that homicide detectives were “not entirely satisfied” with his answers to their questions.

Earlier, officers had indicated Garretson might be released after testing on the polygraph. Buckles said Garretson may still be released – but not until further investigation is completed, probably sometime today.

Lt. Det. Robert Helder told a news conference that efforts to trace the killer – or killers – were centered on acquaintances of the short, slim caretaker.

But Garretson’s attorney, Barry Tarlow, asserted that the killer was more likely someone connected with the murder victims themselves.

“There was a party at the house the night of the killings,” Tarlow said. “From the investigation made by my office, our best guess is that whoever did it was involved in a personal way with these people who were killed.”

What police had originally considered their best clue in the case evaporated late Sunday when Miss Tate’s red Ferrari was found in a Hollywood service garage, where it had been taken for repairs last week. The car had been reported missing, and was the subject of an all-points bulletin.

Coroner Thomas T. Noguchi told newsmen the results of autopsies which determined these causes of death for the five victims:

Miss Tate, 26, who was found in the living room linked by a rope to the body of hair stylist Jay Sebring, was killed by multiple stab wounds of the chest and back.

Sebring, 35, died from stab wounds in the body. The rope linking his neck with that of Miss Tate did not contribute to the cause of death.

Abigial Folger, 26, heiress of the Folger coffee family, died from stab wounds in the chest

Voityck Frokowski, 37, a Polish screen producer and writer, died of stab wounds “of the body and extremities” and of a gunshot wound in the back.

Steven Parent, 18, an El Monte youth who was a friend of Garretson, was killed by multiple gunshot wounds of the chest.

Helder and Noguchi declined to release many details of the crime know to authorities – things Helder said wound be known only to the killer or killers.

They wouldn’t say how many times the victims were stabbed, with what type of weapon they were shot, or elaborate on physical details of the scene of the murders

The five were killed at the $200,000 estate rented by Miss Tate and her husband, film director Roman Polanski, at the end of Cielo Drive in the hills of Benedict Canyon.

The detective and the coroner did, however, provide some previously unreleased details of the crime:

Miss Tate was eight months pregnant with a baby boy.

The telephone lines into the home were cut between 10 p.m., when the phone into the estate was last used, and 5:30 a.m., when Garretson attempted to place a call out and found the lines dead. The murders presumably occurred within that period, Helder said.

The word “Pig” was written in blood, with letters about a foot tall, on the front door. Police said the letters were made with the side of a fist that had been smeared with the victims’ blood.

“We have to assume there was an attempt to escape, when we find the bodies the way we did,” said Helder.

Miss Tate and Sebring were killed in the house. But the other three victims were found dead in what could have been positions of flight: Frokowski shot in the back on the lawn, Miss Folger falling 100 feet farther away on the grass, Parent shot as he sat at the wheel of his car in the estate driveway.

Garretson’s attorney said that Parent was alive at 11:45 p.m. Friday – but wouldn’t comment further on that fact. He said Garretson was asleep in the guest house at the rear of the property and slept through the murders.

Helder said that none of the victims of the murder was sexually molested. There was no evidence of alcoholic beverages having been consumed, and chemical test to determine if drugs had been used by any of the victims are still under way, he said.

The fact that the telephone wires were cut indicated that the murders were apparently premeditated, Helder said. He said the victims were “caught unawares” by the killer.

“It was a weird homicide,” he said, “…but I don’t think we have a maniac running around.”

“I can’t agree with that,” said attorney Tarlow later. “I think there is a maniac running around. And if I were living in that area, I’d be concerned.”

Friends said Frokowski, a friend of Miss Folger, had also been staying at the Tate home, situated at the end of a winding, hilly street.

Garretson can be held for 48 hours, starting Mondy morning, before charges have to be filed – or he has to be released. The 48-hour limit does not apply over a weekend.

Lt. Helder said attempts to talk to Polanski would be arranged through the director’s attorney. “I doubt if he’ll be able to talk to us right away,” Helder said.

The policeman’s prediction was confirmed when Polanski arrived Sunday afternoon at International Airport aboard a jetliner from London, and was immediately taken to an unknown location.