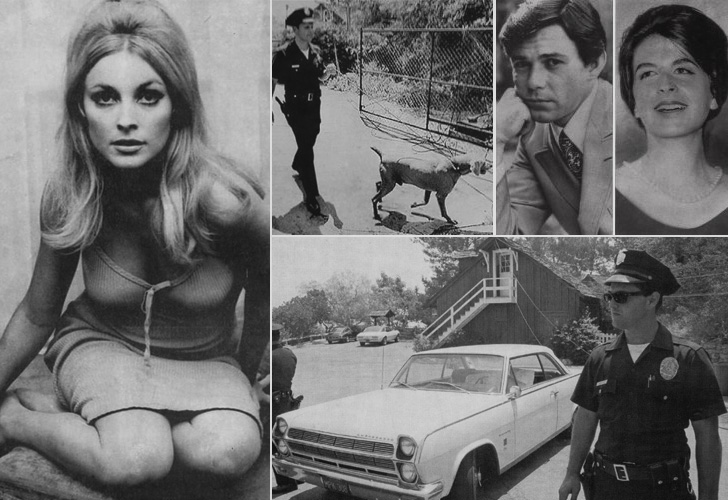 LEFT: Sharon Tate. TOP MIDDLE: Los Angeles animal control officers remove some of the dogs found at Sharon Tate’s BelAir home. TOP RIGHT(L-R): Jay Sebring & Abigail Folger. BOTTOM RIGHT: SCENE OF SLAYING — Police officer stands in front of a car containing the sheet-covered body of one of the five victims found dead in and around the barn type home of actress Sharon Tate in Beverly Glen, Calif. Tentatively identified as victims are actress Sharon Tate and hairdresser Jay Sebring—found inside the house—photographer Voy Frykoski and coffee heiress Abigail Folger—found on the lawn under trees at far left—and the man in the car who has not been identified.

LOS ANGELES, Aug. 10 – A Hollywood actress, an internationally known male hairdresser and an heiress to a coffee fortune were found slain along with two other men Saturday in what one policeman described as a “ritualistic” killing.

The scene was a $200,000, tomato-red home in fashionable Bel Air, rented by the actress’ husband, a Polish producer of suspenseful and macabre films.

A 19-year-old, bare-chested caretaker was arrested in a guest cottage at the mansion and charged with murder.

Police identified four of the five victims as:

— Sharon Tate, 26, a pregnant honey-blonde actress who played sexy parts in movies, including “Valley of the Dolls,” and slapstick comedy on television’s “Beverly Hillbillies.”

— Abigail Folger, 26, a business associate of Sebring and a member of Folger Coffee Co. family of San Francisco.

— A man identified as Voyteck Frykowski, 37, who police said was a friend of Miss Tate’s producer-husband, Roman Polanski.

The fifth victim was an unidentified man.

Police said they arrested William Garretson, 19, of Lancaster, Ohio. They said the slender youth had a rip in one knee of his pants and his living quarters in the guest cottage showed signs of a struggle.

“When are the detectives going to see me?” they quoted him as saying when they arrived. They said he apparently had just awakened. He offered no resistance.

Investigators said the victim were slain 12 hours before their bodies were discovered by a maid, who ran screaming to neighbors.

Officers said the killings appeared methodical and ritualistic because one victim had a hood over his head and two were tied together by a white nylon rope.

Miss Tate was discovered with one end of the rope around her neck. She was dressed in a bikini nightgown, police said.

The cord was looped around Sebring’s neck and pulled across a ceiling beam in the living room.

“It seemed kind of ritualistic,” said an investigating officer.

“It didn’t appear as if the two connected to the rope had been hanged because there was blood on them,” said Lt. James Shannon.

Investigators said all five victims appeared to have been shot.

The word “pig” was scrawled on the front door in what appeared to be blood. Officers said the writer may have used his hand or a rag. “There was ample blood around,” a policeman said.

Sgt. Stanley Klorman said there were signs of a struggle in a large room and in a guest room.

“It looked like a battlefield up there,” said Sgt. Klorman.

Miss Tate and Sebring were found in the living room, two others, including Miss Folger, were discovered on the lawn, and the fifth victim was in a car.

Telephones and electricity were cut off, police said, and Miss Tate’s husband was reported in Europe. Polanski produced “Rosemary’s Baby,” among other macabre-fantasy films.

“In all my years, I have never seen anything like this before,” said officer Klorman. “All of the beds, including those in the guest house, appeared to have been used. But there was no indication of robbery, unless they were very selective.”

In an interview three years ago, Miss Tate said of Sebring: “Before Roman Polanski (her husband), I guess I was in love with Jay. But the truth is I was no good for Jay. I’m not organized. I’m too flighty. Jay needs a wife. And at 23, I’m not ready for wifehood. I still have to live, and Roman is trying to show me how.”

Police said the maid, Winifred Chapman, discovered the killings when she came to work around 9 a.m . “She ran screaming to a neighbor, who called police,” an officer said.

“You better get a police car over here right away. There’s a man lying on the front lawn and blood all over the place. It looks like a bad one.”

Investigators arrived to find the five bodies, the two women dressed in lingerie nightgowns and the three men “appearing in hippie-type clothes,” said an officer.

The death scene was off a canyon in a hilly region between Beverly Hills and the San Fernando Valley northwest of downtown Los Angeles — an area where many Hollywood actors and entertainers live.

Miss Tate, a beautiful blonde who had parts in “The Americanization of Emily” and “The Sandpipers,” also starred in the television comedy “Petticoat Junction.” She liked to refer to herself as “sexy little me.”

At the age of six months, she was chosen “Miss Tiny Tot” of Dallas. At 16, she was Miss Richland, Wash. She got bit parts in the movies by the time she was 18.

Her movie and television roles included comedy, sexy parts, and even the morbid. One of her first roles was in “The Dance of the Vampires” — and had her bathing nude in a bathtub.

She also did television commercials for automobiles and cigars.

Sebring, the noted hair stylist whose salons drew the famous, opened a new operation in San Francisco last May. Husband-wife acting team Paul Newman and Joan Woodward were among those attending his champagne celebration in the financial district. Miss Folger was one of Sebring’s business associates.

Miss Folger, accustomed to high society living, attended Santa Catalina School for women near Carmel, Calif., and was graduated from Radcliffe. Her father, Peter Folger of Woodside, Calif., is president of the Folger Coffee Co., a subsidiary of Procter & Gamble.

Folger said yesterday his daughter had become active in social welfare causes around Los Angeles about six months ago and “more or less commuted” between here and the family home near San Francisco.

“She always has led a clean life,” he said.

The other victim identified by police, Voyteck Frykowski, was a Polish friend of film director Polanski, officers reported. He was associated with Polanski in the director’s first film, “Knife in the Water,” police said.