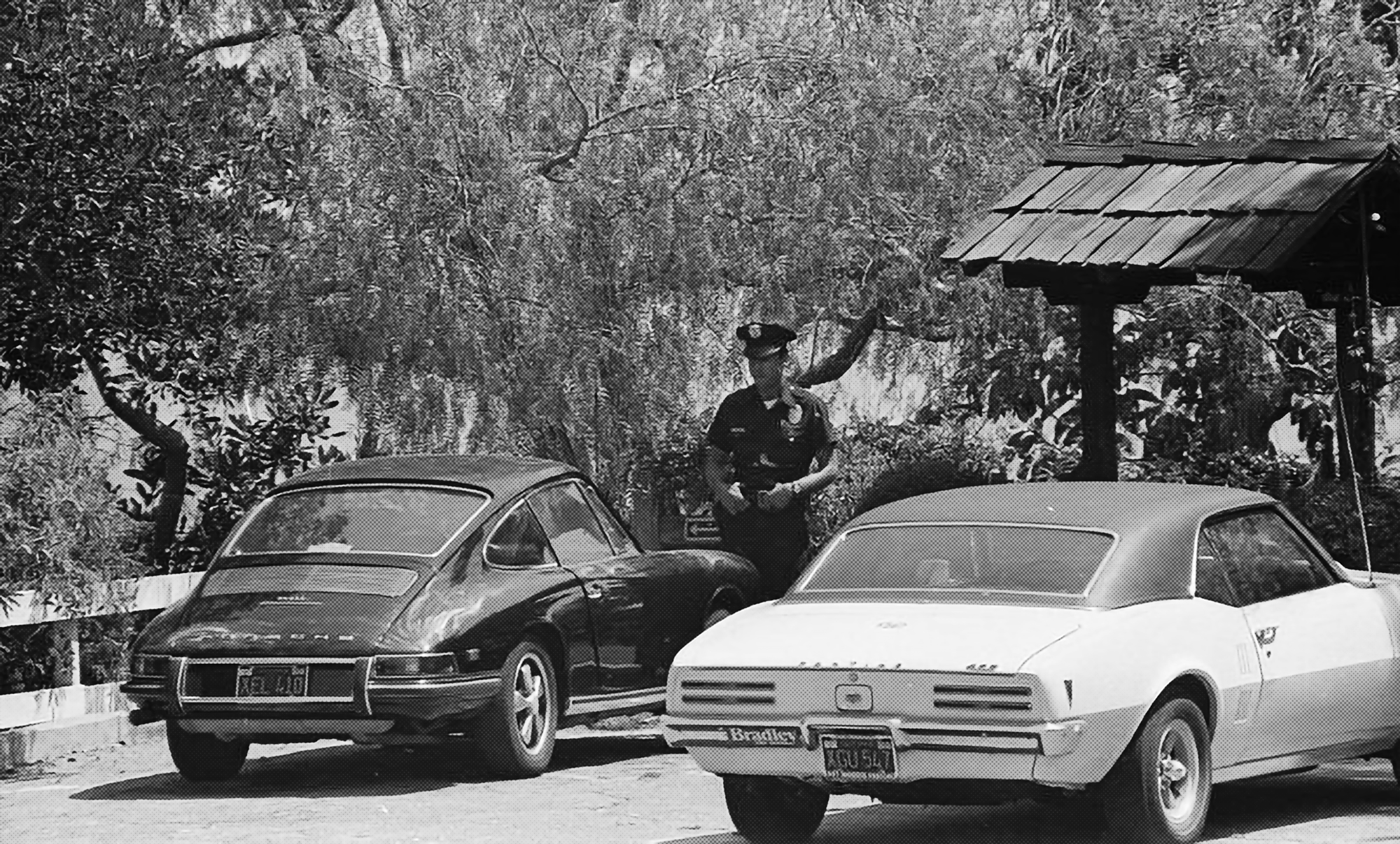 SLAYING VICTIM’S CAR– Officer guards black Porsche owned by Jay Sebring and in which narcotics were reported found. Car is still parked at the Benedict Canyon estate where Sebring and four other persons were slain

LOS ANGELES, Aug 13 -Narcotics were found in an expensive sports car parked outside the Benedict Canyon estate where actress Sharon Tate and four companions were slain, it was learned Tuesday.

Police declined to confirm or deny the report. The detective heading a 19-man team working on the multiple murders would say only:

“Narcotics aspects are under investigation.”

The drugs were found in the 1966 black Porsche owned by wealthy Hollywood hair stylist Jay Sebring.

Among the drugs were a small quantity of marijuana, pills resembling methedrine (or “speed”) and possibly LSD.

Earlier Lt. Robert Helder, head of the Tate case team, had been asked if narcotics had been found at the scene. “Not in the house,” he said.

Police said the backgrounds of the victims of the murder were being investigated to see if narcotics records were involved. They did not disclose the results of the investigation.

But friends of one of the victims – Polish émigré film maker Voityck Frokowsky, 37 – said that he was known to have been a user of narcotics.

Tests to determine if the victims had been using narcotics are under way at the Los Angeles County coroner’s office. Results are not expected to be available for several more days.

Lt. Helder said that there was no evidence of a drinking party in progress at the estate the night of the killings. But it was known that:

1- There had been a party at the home Friday night. The deaths believed to have occurred early Saturday.

2- Frokowsky and at least some of the others who died in the outburst of stabbing and shooting were members of a “pot-oriented” Hollywood group, among whom use of marijuana was commonplace.

Killed with Miss Tate, Sebring and Frokowsky were Abigail Folger, 26-year-old coffee family heiress, and Steven Parent, 18, a friend of the estate caretaker, William E. Garretson, 19, who was arrested after the killings but released Monday.

Garretson’s mother, Mrs. Mary Garretson, said in Lancaster, Ohio, she expects her son to return home as soon as he is rested.

She said she talked to him by phone since his release and he was “tired and incoherent.”

“He will stay here,” she said. “Everyone loves him here and knows he couldn’t have done anything wrong.”

The probe of the narcotics aspects of the case necessarily led police into two lines of investigation:

– That the killer or killers might have been “freaked out” on drugs and murdered in a paranoid frenzy.

Lt. Helder told newsmen earlier that he felt that the killings were premeditated, because the telephone lines leading into the actress’ home at the end of Cielo Drive had been cut.

The lines are 18 feet above the ground. They were slashed not far from where Parent was shot to death as he sat in his car on the driveway of the secluded home.

Lt. Helder’s supposition that the crimes were premeditated would presumably make a “freak-out” type of killing unlikely. But police were not concentrating on any one theory. Two lieutenants and 17 detectives are following up every possibility.

Chemical tests were believed being made of the drugs found in the black Porsche.

It was found parked next to Miss Folger’s new Pontiac Firebird on the blacktop entryway to the Cielo Drive estate. The Parent youth’s car was 100 feet away, angled toward the entry gate where Cielo Drive ends and the sprawling estate begins.

Film director Roman Polanski, husband of Miss Tate, rented the home from the owner. Polanski was in London at the time of the murders. He flew home Sunday. He is now in seclusion at an undisclosed location.

Funeral arrangements had been made Tuesday for all of the victims except Frokowsky. Miss Tate’s funeral, which will be private, is expected to be conducted today.

Frokowsky’s mother and brother reportedly have been granted permission by the Polish government to come to America for a funeral service tentatively planned for Thursday in New York City. Friends there are planning the service.

About 100 persons attended Rosary services for young Parent Tuesday night at the Church of the Nativity in El Monte. Requiem mass will be at 9 a.m. today at the church, followed by burial in Queen of Heaven Cemetery.