Polanskis Were at Center of Rootless Way of Life 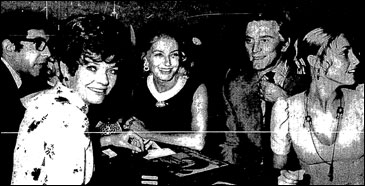 Sharon Tate, right, at a party with Kirk Douglas, the actor, and his wife. At the left is Polly Bergen, the singer.

LOS ANGELES, Aug. 30 – A beautiful actress. A hair stylist who was a Hollywood socialite. A Polish émigré. A wealthy young Radcliffe graduate. Four lives whose twisted paths crossed on the night of Aug. 8. They – along with an 18-year-old youth – were murdered in an isolated hilltop home.

The murders remain unsolved, and in the absence of facts, amateur detectives are having a field day. But the savage killings did more than provide local cocktail party chatter.

The murders brought into focus several life cycles – disparate yet connected – that displayed some of the glamour and intrigue that have long fed the Hollywood script mill.

Sharon Tate was 26 when she was murdered, a stunning actress who literally “stopped traffic” the first time she visited New York.

At the time of her death, she was pregnant eight months with the child of her husband Roman Polanski, the noted film director, who was in London.

The film industry is not in any one place. It rotates among London and Los Angeles and New York and Paris and Rome. Wherever you are, you always run into the same people.

Center of a Group

The Polanskis met several years ago while working together on a film. Since then, they had been near the center of a loose group of film makers who were described with all the current clichés: mod, hip, swinging, trendy.

This group was not only more youthful but also more international than the Hollywood Establishment. It members were “rootless vagabonds” as one studio executive put it, at home in a dozen places, and yet belonging nowhere. Their names never appeared on the maps tourists buy on Hollywood Boulevard to find the homes of the stars; they had no homes.

The Polanskis were unusual; they rented a house. Most of their friends lived in apartments and hotels, restaurants and shooting locations, airplanes and steamships. As one successful actor put it:

“It’s a peculiar thing about movie people. The film industry is not in any one place. It rotates among London and Los Angeles and New York and Paris and Rome. Wherever you are, you always run into the same people.”

Yet if the Polanskis and their friends represented a new breed in Hollywood, much remained the same.

As one writer said: “There is a lot of talk about the new Hollywood, but it is the same old Hollywood, only it’s 1969. It’s still the American dream, still the race for money and fame.”

“The impermanence makes for an edginess, an urgency, and unreality – or, more precisely, for an almost involuntary detachment from the ongoing concerns which move and occupy most mortals. It can make for a particular kind of hedonism; eat, drink and be merry, for tomorrow your agent may not return your calls.”

Roman Polanski, the Polish-born movie director, with Mia Farrow, who was the star of his film “Rosemary’s Baby.”.

The Polanskis’ friends were a diverse group that included such actors as Peter Sellers, Yul Brynner and Warren Beatty; Michael Sarne, a British director, who made “Joanna;” Simone Hesera, another young director; Dick Sylbert, the art director for “Catch-22;” John Phillips, formerly of the Mamas and the Papas, a singing group; Brian Morris, who once ran a discotheque in London and is opening a new club here; Hatami, a photographer, and Victor Lownes, head of Playboy International.

For the most part they were talented and successful. They made pictures people talked about – “Bonnie and Clyde,” “Rosemary’s Baby.” “Blow-up.” They were self-indulgent but not very self-centered. They did not especially seek publicity nor care who they were seen with. They were loyal to one another and invested in one another’s enterprises. They were handsome and young and free.

“One of the most moving things at Sharon’s funeral,” said Ruth Gordon, the veteran actress who worked with Mr. Polanski on “Rosemary’s Baby,” “were all those adorable girls, all those girls with their long hair and miniskirts.”

“We were always out enjoying ourselves, it was always great fun.” said Peter Sellers. “If Roman had a premiere in Paris, why we’d all fly over there for it. Or we would have lunch in London and dinner in Copenhagen.”

It was revealing that the Polanskis, who also rented a house in London, had decided to raise their baby in California. Like many of their friends, they enjoyed the casual dress, the informal social life, the closeness of the mountains and the deserts and the ocean.

The Polanskis and their friends had money, and they spent it. Their clothes were expensive and stylish – bellbottom pants, open-necked shirts, wide belts. They like fast cars (Mr. Polanski drove a red Ferrari) and motorcycles. Skiing vacations in the Alps were almost a ritual. They talked about three-star restaurants in Paris and discotheques in New York and equal facility.

Many of them preferred marijuana to Scotch, but as one of them put it, “So does everybody else these days, this is speakeasy time for pot.” Some of them might have dabbled in harder drugs, such as cocaine, but there is a limit when you have to be on a movie set at 7 A.M.

They were more European than American in many ways, especially in regard to sex, which was always plentiful and, actually, rather unimportant.

Mr. Polanski became close friends with his wife’s former escort, Jay Sebring, the hair stylist who was murdered with her. The director was devastated by his wife’s death, and yet he had made no attempt to hide his friendships with other women.

“We are living in the midst of a sexual revolution, and we are certainly a part of it,” said one young actor. “But read ‘Couples.” They’re doing it in Massachusetts, too.”

There was a constant party, there was never a night without friends.

The Polanskis “exuded a warmth and a magnetism people just wanted to be near,” said one friend, and their rustic, comfortable house was always open.

“There was a constant party.” Mr. Polanski recalled at a news conference last week, “there was never a night without friends.”

Scattered among the friends were hangers-on, people who thought knowing Mr. Polanski could be useful, and he did not always discourage them.

“Roman sometimes seemed to need an entourage,” said one acquaintance, “it was rather sad, actually.”

A Hollywood press agent added: “They never seemed to want to be alone.”

There was a constant desire for company and action. When Gene Gutowski, Mr. Polanski’s partner in a producing company, rented a villa in Cortina, Italy, last winter, he wound up with 17 house guests. And Brian Morris designed his new club, Bumbles, to be mainly a gathering place for his friends.

“My dream,” he said, “is to have Bumbles clubs all over the world and connect them with closed-circuit TV. Then no matter where you were, you could see all your friends any night you wanted.”

Jay Sebring, the hair stylist, who was Sharon Tate’s former escort. He became a good friend of Mr. Polanski.

One outsider who became an accepted member of this Hollywood scene was Jay Sebring. Many top stars were considered his close friends, and he flattered both their hairlines and their egos.

When a particularly important man called, Mr. Sebring dropped everything to give him a trim, according to John Madden, his business partner.

A short and slender man, Mr. Sebring drove motorcycles, bought a Porsche, learned karate and went to auto racing school (his last name he took from a race track in Florida).

Beautiful girls were almost a trademark. When he opened his San Francisco shop, Paul Newman went to the party, and when he died, Henry Fonda and Steve McQueen went to the funeral.

There was another life style illuminated by the violence of Aug. 8, a style that contains another kind of unreality and hedonism.

The style is that of the émigré, the Polish émigré in particular, who fled the repression of his homeland and was looking for a new start in life.

Voyteck Frokowski and his girl friend, Abigail Folger, were killed outside the house where Miss Tate and Mr. Sebring were found.

Mr. Frokowski, who knew Mr. Polanski in their student days, left Poland about two years ago and came to America after a brief interlude in Paris.

Bright young Polish intellectuals have left their country and settled here in recent years to form almost an underground railway.

“When someone needs something, we all help out,” said one writer, “and when someone new comes over we gather the troops for him. Sometimes we have parties on Polish holidays.”

When Mr. Frokowski landed in New York he stayed with Jerzy Kosinski, the novelist, whose book, “Steps,” won the National Book Award last year. When he went west, he looked up his old friend, Mr. Polanski, who was probably the best Known of the émigrés.

“Everyone who comes out of Poland tries to latch onto Roman,” said Gene Gutowski, another refugee.

“They phone up,” he said, “and say, ‘Do you remember me? Can you help me? Can you write a letter to this person or that person?’ It bothers him sometimes, but he is very loyal, and he always helps if he can.”

While some of the émigrés were very industrious and successful others, like Mr. Frokowski, had more of a flair for living than for work.

“People here always ask you what you do and how much you make.” Explained one Pole. “In Europe they never ask you that. Here Frokowski had to make stories up, but he was never routinely employed. He didn’t want to do anything but read and see friends and observe.”

At the same time there was something “brooding and disturbed” about Mr. Frokowski, and many of his Polish friends, one colleague said.

“We belong to a generation which survived the war in a peculiar way and shouldn’t have,” he said. “We were put on crooked orbit at the age of 6 or 7 and we have always moved in strange ways. We don’t know what will happen to us and we don’t want to know. We mistrust the future, we’ve seen what happened to people who did trust the future.”

Gibby Folger represented yet another way of life. Heiress to a fortune made in the wholesale coffee trade, she attended Catalina School for Girls, had a sumptuous debut and emerged from Radcliffe as a bright, well-educated and aimless young woman.

She traveled in Europe. She worked in a museum in San Francisco and a book store in New York. She campaigned for Robert Kennedy, and she cared for children in Watts. Her relationship with Mr. Frokowski told something about both of them and their friends.

“Gibby was very much alive with Voyteck,” said one friend. “He changed her outlook. She realized she didn’t have to conform to that damn Protestant ethic. I remember once asking her how she was and she laughed, “Well, I’m not my old constipated self anymore.’”