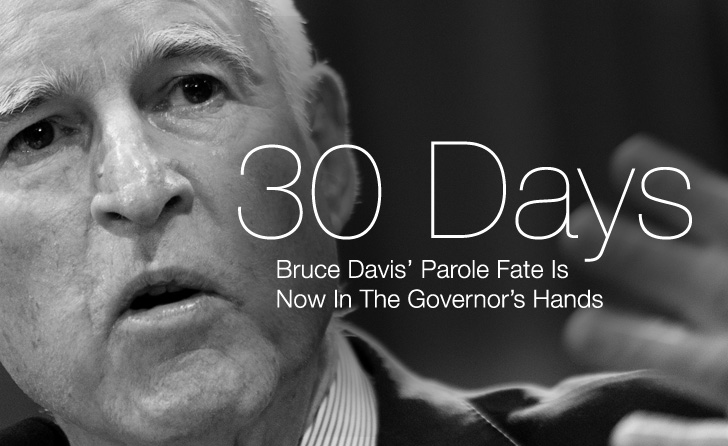 Jul. 10 – Governor Jerry Brown will have until August 9th, the 45th anniversary of the Tate murders, to decide whether or not to affirm, modify or reverse the Board of Parole Hearings’ decision to grant Bruce Davis parole.

The Board of Parole Hearings’ March 12th recommendation for parole has now been confirmed after the 120-day BPH review process and today becomes subject to Brown’s review.

Davis, 71, serving life terms for his role in the 1969 murders of Gary Hinman and Donald “Shorty” Shea, has been recommended for parole in three consecutive hearings, but has seen two of those recommendations reversed during the executive review process.

Davis was again recommended for parole at his next hearing held on October 4, 2012. But that decision was reversed in March of 2013 by Governor Brown, who stated Davis was still unsuitable for release into society because of the heinous nature of the crimes. Brown’s reversal highlighted areas where, over the years, he felt Davis had minimized his role in both the Manson family and their crimes. The governor also questioned how truthful Davis had been, stating as an example, that Davis hadn’t mentioned Larry Jones being present during the Shea murder until his 2010 parole hearing.

Brown now has 30 days to decide whether he will let the board’s March 12th recommendation stand. And as fate would have it, that review window will expire on the 45th anniversary of the most infamous of all Manson family crimes, the Tate murders.