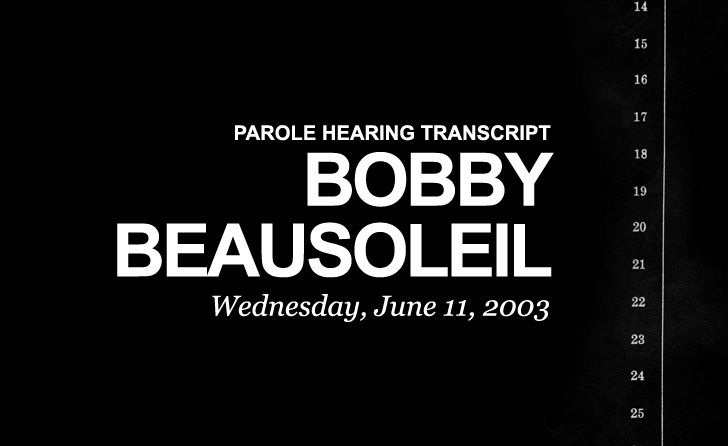 STATEMENT MADE BY BOBBY BEAUSOLEIL AT HIS JUNE 2003 PAROLE HEARING.

I would like to make a statement and say a few things. Now this is the part where I get to tell you why I think you ought to let me out of prison. And you know, that’s not really what I understand about what is happening and that was really happening, because this really is not about me. I understand that now, whereas I didn’t when I was a kid, you know, when I was 20 or 21 years old. I thought it was all about me. But it’s not about me. This is about what is best for society. I hope that what is best for society and what I can bring to a successful parole will coincide at some point. I do want to be united with my family, but like I said, it’s not really about what I want.

But again, it’s not really about what I want. It’s about what is best for society. And in that regard, I’ll say this. I am really extremely sorry for what I’ve done to bring harm to all the people that I’ve brought harm to over the years. And it begins, of course, with Gary. And I am fully cognizant of what I did there. I mean there’s discrepancies in the facts, and I really can’t speak to that anymore. I’ve told you what I know from my own experience, and I hope that you will use that to mitigate Danny DeCarlo’s self-serving statements early on. It’s my own fault that I didn’t own up early on and have this be part of the actual court records. So I have nobody to blame there. And so I can’t really tell you that you have to believe me. All I can do is represent to the best of my ability the facts as I know them.

I killed Gary Hinman. I am responsible for that. It was my decision to do it. Nobody forced me or ordered me to do it. I feel that I was, you know, as I’ve said, I was kind of forced into the position of being there in the first place, but that, again, was from the decisions that I had made earlier on. I had entered into a drug transaction that escalated and got out of control. But I made that decision initially, and it rests with me. I must hold myself accountable.

Insofar as how it has hurt Gary, in 1981, a man did exactly to me what I did to him. I was stabbed in the heart and both lungs, and for some reason, some miracle kept me alive. And so now I since then for the past 22 years, I’ve had an opportunity to remember what that felt like. So I know what I did. I also know how it affected Gary’s family because I know intimately how it affected mine. Excuse me. I hurt a lot of people, and I’m very sorry for having done that. I want to be able to give something back. It is my very clear intention to give something back, to do the best that I can to make amends, to honor Gary’s life by helping other people to understand how I took it, so that they won’t make the same mistakes that I’ve made.

I think that’s probably the best that I can give, although I know it’s never really enough. If all I have is a prison cell and a piece of paper and a pencil, I will continue that work. Thank you.