Executive Review: The Next Step

Posted on December 6, 2012 by cielodrive.com 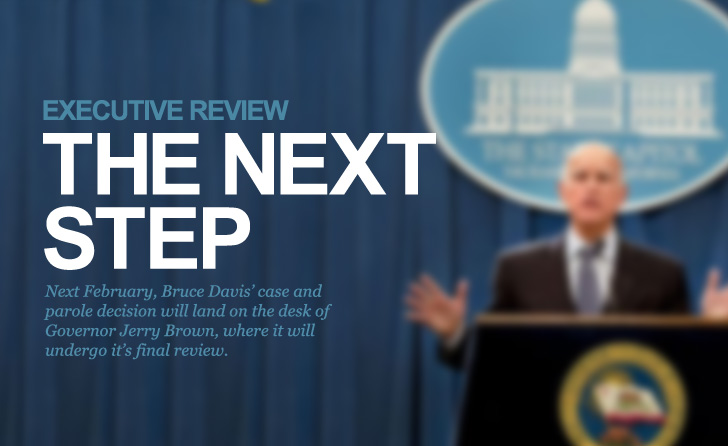 Dec. 6 – Next February, Bruce Davis’ case and parole decision will land on the desk of Governor Jerry Brown, where it will undergo it’s final review. Brown will have 30 days to review Davis’ case and prison records, and then affirm, modify or reverse the Board of Parole Hearings’ decision to grant him parole.

This process is nothing knew for Davis. In June of 2010, then governor, Arnold Schwarzenegger reversed a Board of Parole Hearings decision that would’ve granted Davis parole, saying, “I believe his release would pose an unreasonable risk of danger of society at this time.”

When Ferguson inquired if Davis had read Schwarzenegger’s letter, he responded, “I read it more than once and at the end of reading it, I realized that I should have been more explicit in my assumption of responsibility for my crimes.”

“Do you think that the Governor made some valid points?” questioned Ferguson.

“I recognized the Governor’s concerns, his worries, his suspicions, and everything has a degree of validity, I suppose,” said Davis.

Davis, 70, is serving a life sentence for the murders of Gary Hinman and Donald “Shorty” Shea, and has been in prison since April 21, 1972. Since that time, Bruce has been active in many self-help and spiritual groups within the prison. His prison disciplinary record is near spotless, with only 2 rules violations in over 40 years, last one occurring over three decades ago.

“By no conceivable stretch of anyone’s imagination has Bruce Davis not rehabilitated himself,” said Davis’ attorney Michael Beckman. “No one, not even the District Attorney from Los Angeles County said anything negative about his prison program.”

In October, a California Parole Board granted him parole for the second time in as many hearings.

“You’ve lived in a very difficult environment for over 40 years and you’ve managed to completely avoid any violence whatsoever,” Commissioner Ed Alvord told Davis, after announcing the board’s decision to granted him parole. “You’re to be commended for that. That’s not an easy thing to accomplish, especially not for that length of time.”

Whether or not the decision will be upheld after the review process, is still up for debate. In February, the AP reported that Governor Brown has allowed about 80 percent of decisions by the parole board to free convicted killers. While Former Governor Schwarzenegger had allowed only 25 percent and Governor Gray Davis allowed just 2 percent to walk free.

According to the 2011 Executive Report on Parole Review Decisions, Governor Brown reversed or modify the parole decisions for 71 inmates, 28 of which, were first degree murderers. Reasons given for the reversals ranged. According to Brown, some inmates lacked insight, some minimized their culpability, and others posed an unreasonable risk of danger to society.

While none of the 71 inmates whose paroles were reversed by Brown in 2011 had been incarcerated as long as Davis, some of the cases dated back to the 1970’s.

In March of 2011, Governor Brown reversed the parole decision for Calvin Thornton, who in 1972, conspired with Phillip Ross, to rob James Dover, a neighbor they had just purchased drugs from. When Dover refused to give the two men money, Thornton and Ross beat him to death.

According the Thornton’s parole decision, “the Board of Parole Hearings found Mr. Thornton suitable for parole based upon his participation in self-help programs and vocational training, positive institutional work record, realistic parole plans, enhanced ability to function within the law upon release, expressions of remorse, and reduced risk of recidivism due to age.”

Governor Brown commended Thornton’s prison accomplishments, but said they were “outweighed by negative factors that demonstrate he remains unsuitable for parole.”

“[Thornton and Ross] were motivated solely by their desire for money,” continued Brown, “a very trivial motive in relation to the offense. The two men carried out the attack in an unnecessarily gruesome manner demonstrating an extreme callous disregard for the suffering victim.”

In 10 of 71 cases Governor Brown reversed in 2011, Brown noted that opposition from the District Attorney’s office, police agencies, and victim’s next-of-kin, factored into his decision to reverse. In one case, Brown even indicated potential public outrage was a factor in his decision.

This will be a significant hurdle for Davis, since his release is opposed by the Los Angeles County Sheriff’s Office, the District Attorney, members of the Shea and Hinman families, and the public.

Debra Tate spoke first, reading a letter to the board from Gary Hinman’s cousin, Kay Martley.

“Gary was killed under horrific circumstances and Bruce Davis was there and took part in his death,” wrote Martley. “Gary had never done anything that would have given Bruce Davis or Manson the right to take his life. Why should Bruce Davis have freedom?”

“I lived my life growing up wondering just what was my father like,” wrote Karen. “I was denied the chance to ever get to know my dad by the selfish, cruel, immoral actions of the people who murdered him when I was merely a child.”

After reading the letters, Hoyt went on and related her own experiences with the Family and Bruce Davis’ role in it. Unlike Tex Watson, who Hoyt referred to as a “very happy-go-lucky goofy guy who was submissive to Charlie in every way,” Davis was feared by the girls, whom he seemed to enjoy bossing around.

“The first killing that he participated in, that of Gary Hinman, didn’t phase him,” said Hoyt. “He still stayed. The deaths of seven more victims didn’t bother him enough to leave. He then helped murder Shorty Shea. Now nine murders have occurred and he still stayed. He was present when Zero was killed.”

Hoyt has opposed Davis’ release for years and testified at an En Banc hearing in November of 2006, after Davis received a split-decision earlier that year.

Hoyt’s testimony is a significant issue for Davis, because her account of Donald Shea’s murder contradicts Davis’ version. Davis claims it occurred in the morning, while Hoyt insists it happened at night. If Governor Brown believes Hoyt, he will have to conclude that Davis is still not being truthful about the crime. That alone would be grounds for Governor Brown to reverse the board’s decision to parole Davis.

It’s anyone’s guess, whether or not Governor Brown will see Davis as a rehabilitated man, or as a dangerous killer still withholding information about his crimes. Until February, like Davis himself, we will wait and wonder.

5 Responses to Executive Review: The Next Step