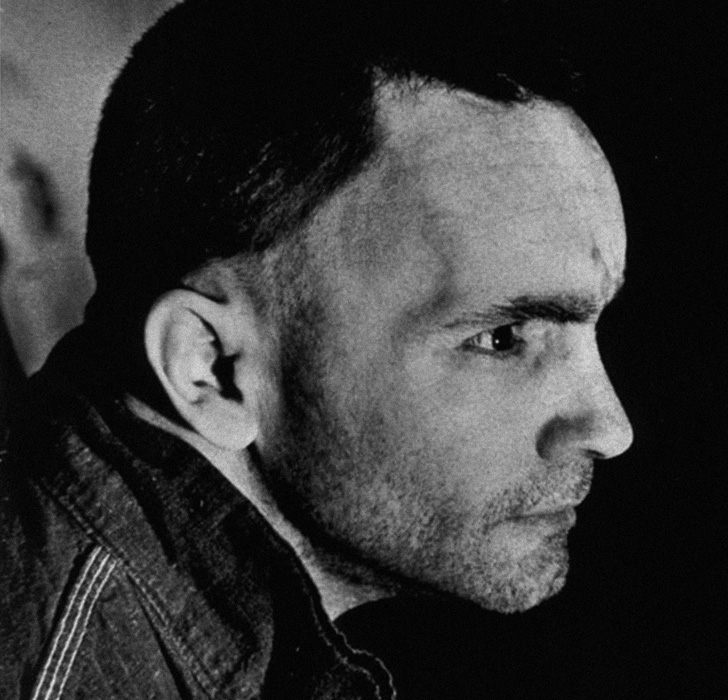 HE’LL SOON KNOW HIS FATE: Charles Manson glares into the distance as he leaves court in Los Angeles today with the penalty phase of his trial in the Tate-LaBianca murder case near its close. Final defense arguments to save Manson and three women co-defendants from the gas chamber are being heard.

LOS ANGELES, Mar. 23 — Hippie leader Charles Manson warned the prosecutor in the Tate-LaBianca murder case today that there would be “nothing but murder and bloodshed” if the jury brought back a verdict of death for him.

The threat came today as Manson stood in his holding cell adjacent to the Los Angeles Superior Courtroom in what possibly might be the last day of arguments before the five-woman, seven-man jury begins deciding his fate.

“If I get the death penalty there’s going to be nothing but murder and bloodshed afterward, because I’m not going to take it,” Manson told chief prosecutor Vincent Bugliosi as the trial prepared to resume this morning.

Judge Charles Older ordered Manson removed to the rear of his holding cell, where his comments could not be heard in court.

Prosecution sources said that the hippie leader three months ago had threatened to kill his own attorney, Irving Kanarek, and then Judge Older, if the death penalty should be returned against him.

Manson apparently had made the threat to a bailiff who passed it on to the prosecution.

As the case opened today, the third defense attorney in the trial asked the jury to spare the life of his client, Leslie Van Houten, and called her “cannon fodder, whose mind was a vacuum ready for the intrusion of the devil.”

Pasadena attorney Maxwell Keith, in an impassioned plea to the jury which will decide whether Charles Manson and three of his girl disciples live or die for the seven killings, said there was a “force so strong, so powerful that I am powerless against it.”

Without mentioning Manson’s name, the graying attorney seemed to place the blame for his client’s murderous assaults on the hippie leader.

“What forces prodded these tragedies…what terrible storm came down to blight the lives of not only these girls,” the attorney said nodding toward the three girl defendants, Miss Van Houten, Susan Atkins and Patricia Krenwinkel, “but the lives of all the girls at the Spahn Ranch: f think we know. You have insight. I think you know, too.”

Claiming that if the Manson “family” lived without rules and restraints — like an anarchy — it would not have survived, Keith called it a very coherent group.

“There must have been a leader — an organization. But didn’t the girls tell us the whole story?” he asked the jury. “Is there some frightening influence that has permeated the sick minds of the individuals you see here?

“By the time Leslie arrived at the Spahn Ranch her mind was a vacuum ready for the intrusion of the devil. She was cannon fodder. She was not prepared for what was going to happen to her.”

Miss Van Houten, the attorney said, was 17 when she came to the Spahn Ranch, the home of the Manson “family,” and began using LSD consistently.

This is the terror of the drug. You have before you know it a little child to whom nothing is very serious. She lives for today like a little child.

“She’s a mindless child, deceived into believing that the life of the Spahn Ranch was beautiful. But instead she was being used maliciously and viciously. She was a sacrificial lamb. She might have as well have fallen into a swamp filled with alligators.

“She was taken in. She was totally incapable of understanding what was happening to her.

“She’s been conditioned like a soldier in battle. Soldiers are conditioned to kill. They don’t show remorse. Sometimes its exciting — there’s a thrill about it similar to what happened in this case.

“This isn’t the real Leslie before you in this courtroom. This is a caricature of the homecoming princess of years ago. A pathetic and forlorn caricature and probably one that’s very much afraid.

“She’s like a rag doll. So why kill her? It’s already been done.”

As the end of the marathon trial neared Monday evening, Los Angeles Superior Court Judge Charles Older warned jurors they should anticipate being sequestered tonight and should bring the “necessary personal articles.”

The judge issued the welcomed warning to the jury after the second of four defense attorneys, Daye Shinn, ended a 45-minute summation on behalf of his client, Miss Atkins.

Shinn, in a unique argument to spare his client’s life, claimed that there had been a “conspiracy” between Miss Atkins” former attorneys, Richard Caballero and Paul Caruso, and the district attorney’s office to “deny her her life.”

The attorney said the girl had been promised a term of life imprisonment if she testified against her “family’ before the grand jury. She did, he said, but the then-District Attorney Evelle Younger reneged on the promise.

Earlier Manson’s attorney Irving Kanarek ended his almost-three day final statement with the same theme:
“For the past 23 years — since he was a boy of eight — he’s lived in a prison atmosphere without creating any problems,” Kanarek told the almost-dozing jurors. “There’s no reason to think he couldn’t do the same thing in this case. He’s not such — has not caused such problems — that we have to gas him to death.”