Posted on September 2, 1969 by cielodrive.com 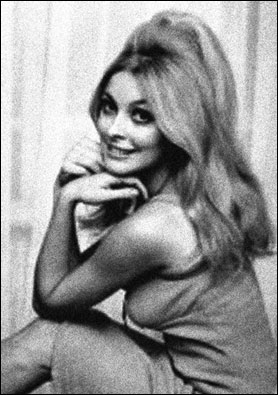 MURDER MYSTERY — After an investigation of one month and interrogation of 300 persons, Los Angeles police today are no nearer solving the murder of Sharon Tate and four other persons, than they were the day following the macabre murder. This photo of Miss Tate was taken in 1965.

LOS ANGELES, Sept. 8 —It was so messy a murder.

Five bodies. Footprints in pools of blood. A nylon rope. A neighbor who heard screams and shots. The word “Pig” scrawled in blood on a door.

Ties to narcotics. Hollywood names that brought international publicity. An informant who named names.A caretaker who found the phone dead in the hour before dawn.

There seemed clues enough to solve a dozen ordinary murders.

But a month later, and after quizzing more than 300 persons, police today apparently still do not have a prime suspect in the grisly slaying of Actress Sharon Tate and four others in a rented Benedict Canyon home.

If they know the motive, they are not saying. The weapons, a knife or sword and a gun or guns, have not been found. Apparently the killers did not leave a fingerprint although the carnage ranged from the living room to the lawn to a car in the driveway.

Police are not sure whether there was one or several killers although they lean strongly to the latter theory. One victim apparently was slain because he happened on the murder scene.

Miss Tate was the wife of Roman Polanski, French-Polish director on the movie “Rosemary’s Baby,” who flew here from London after the Aug. 8 slayings.

Polanski defended his wife as a lovely girl who had been vilified. He said she was a “vulnerable” person who could not refuse friendships and liked “constant parties” but he said she did not use drugs, drink or even smoke.

Polanski’s tearful and indignant rejection of any idea of a wild party did not square, however, with the scene police found when they were summoned by a terrified maid.

Sharon’s body was found nude, not in pants and a bra as first reported, in the living room. The nylon rope had been tied around her neck, cast over a beam and down around the neck of Sebring, a former fiance of Sharon, who wore only boxer shorts.

They had been killed with a sharp weapon and there were “X ‘ marks cut in both bodies.

The 37-year-old Frokowsky was found on the lawn. He had been stabbed and shot. Miss Folger, in a nightgown, was found dead of stab wounds not far away. Young Parent was in his car, shot five times in the chest.

A next door neighbor said he awoke to hear a woman screaming that night and what seemed to be shots. At first he thought he was dreaming, but then decided it was just another party.

“There’s a lot of screaming and yelling in this neighborhood on weekends,” he said. “You get sort of used to it. It’s like living near a freeway —pretty soon you don’t hear the cars driving by.”

The probe almost immediately was focused on Frokowsky, who was known to have dealt with narcotics pushers, his habit financed by the wealthy Miss Folger with whom he had been living at the Polanski home as “company” for Sharon.

A Polish artist friend of his named persons with whom Frokowsky had dealt in drugs and police whisked him away under heavy guard when his name appeared in a Los Angeles newspaper.

The 35-year-old Sebring was found to have narcotics in his black Porsche which was parked near the scene. He was a man with violent convictions, including anti-Negro ones, who had a black belt in karate.

Parent had been visiting the caretaker, William Garretson, 19, at a guest house across a pool from the home. Garretson, the only one alive on the scene when police rushed in the next morning, has been absolved and is suing the city for $1.25 million for false arrest.

Police believe Parent was killed as he prepared to drive away, unaware of what was going on. Garretson said he sat up through the night in the secluded guest house, listening to records and writing letters, and heard nothing. He tried to use his telephone extension after dawn but thought nothing amiss when he found it dead.

A second “suspect,” Thomas Michael Harrigan, was being sought in Canada when he surrendered himself and proved he had been with friends miles away the night of the murders.

Dept. Chief Robert Houghton admits the more time elapses the harder it may be to solve the crime.

Could the killers strike again? “Personally, I suspect not,” he says. “Professionally, I couldn’t rule it out.”