• Watson is Guilty of 7 Cult Killings

Watson is Guilty of 7 Cult Killings 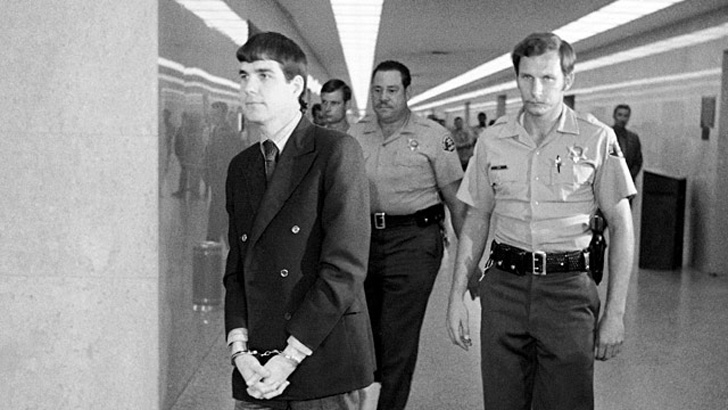 Charles ‘Tex’ Watson is led back to his cell from a courtroom in Los Angeles after he was convicted Tuesday of seven counts ot first-degree murder and one of conspiracy to commit murder in the Tate-LaBianca slayings. Watson, a former member of the Charles Manson ‘family’ was the last of five defendants to be convicted in the murders.

The 25-year-old member of Manson’s hippie family sat calmly, showing no emotion as the six-man, six-woman jury filed into the Los Angeles Superior Courtroom — 32 hours after they had begun deliberations — with the decision that he had murdered five victims at the home of actress Sharon Tate and two others the following night at the home of market owner Leno LaBianca. He also was found guilty of conspiracy to commit murder.

Although the guilty verdict was expected since the young record-holding athlete had taken the witness stand and admitted wielding the knife at both homes, defense attorneys had hoped for a verdict of second degree murder, which carries a penalty of five years to life.

The same jury will return to the court Friday to decide whether Watson was insane at the time of the murders. Attorneys had pleaded him innocent and innocent by reason of insanity.

Should the jury find that he was insane at the time of the murders he will be committed to a mental institution until doctors feel he has been cured. However, should the jury decide he was sane at the time, they will then decide whether he should spend the rest of his life in prison or die in the gas chamber.

Five other members of Manson’s “family,” including the cult leader himself, are now sentenced to die in the gas chamber. Patricia Krenwinkel, Leslie Van Houten and Susan Atkins were convicted along with Watson, of the Tate-LaBianca killings earlier.

Robert Beausoleil, another member of the clan, has been sentenced to die in the gas chamber for the murder of Topanga Canyon musician Gary Hinman, a week before the Tate killings. Manson currently is on trial for the same crime, as are two other members of the clan, Bruce Davis and Steve Grogan.

Watson, who unsuccessfully fought extradition from his native Texas for 10 months and later was confined to a state mental hospital, took the witness stand in his own defense, claiming he killed on Manson’s orders.

His attorneys, Sam Bubrick and Maxwell Keith, argued that their client had been brainwashed by Manson and blindly carried out the killings in August 1969. Manson, the attorneys claimed, had turned the former honor student and athlete, into a “robot” through the constant use of drugs and sex with the Manson girls.

Watson, dressed in a dark-blue blazer and pale blue shirt, was alone when the verdict was returned.

His mother, Mrs. C. Denton Watson, who sat in a back seat of the courtroom during most of the three month trial, returned to her home in Copeland, Tex., before the verdict was reached.

Manson’s “girls,” who have kept vigil outside the Hall of Justice where their leader is on trial since shortly after his arrest almost a year ago, were busy trying to get a seat in Manson’s trial court. They had been refused entry because they were barefoot.