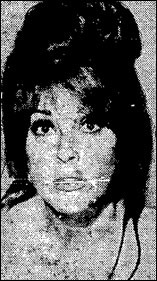 HOLLYWOOD, Aug. 31 — Publicity men relish nothing so much as a rags-to-riches theme and seldom overlook a chance to tie a client into the story of “instant stardom” or Cinderella-like adventures — such as being discovered (as in Lana Turner’s fabled case) sipping malt at a soda fountain.

Sharon Tate, the public generally believed, was hiked into movie orbit through her role as the great beauty Jennifer North in “Valley of the Dolls.” This was anything but factual.

Sharon Tate’s “instant stardom was a trick done with wigs, aliases, coaches and several hundred thousand dollars invested by a shrewd producer who had faith in her ultimate box office power. Actually, while it appeared that Dallas-born Sharon leaped in one jump from complete anonymity to star status, she had been in the “comer” category for 30 long months!

She was a sort of “Eliza Doolittle” of a corporate Henry Higgins — in this case Martin Ransohoff, head of Filmways, a production company.

Shapely, ash-blond Sharon had arrived in Hollywood six years ago. Her huge hazel eyes and sultry face and figure attracted attention everywhere she went. When she turned up to apply for a part in a Filmways TV series, “Petticoat Junction,” Ransohoff himself happened to walk by. He took one gasping look and told an aide, “Sign that girl.”

As Sharon said later, “I thought he meant, somebody else — I looked so terrible. I was wearing an orange dress with big patch pockets and my hair was every which way, then,” she said.

But he meant Sharon all right, and before she knew it she was under contract — a personal pact with him. Then it began:

Classes in singing, dancing, speech, physical culture and dramatics. Meanwhile, there were small parts in Filmway pictures. “And in all of them,” she said, “I wore a black wig and was billed under another name. Mr. Ransohoff said he didn’t want the audience to ‘see’ me until I was ready.”

Her grand unveiling, after Ransohoff had run up a bill of $300,000 on her development, came in “13.” She was cast as a French country girl who exercised witch-like powers on David Niven and Deborah Kerr. It was not a devastating debut but she was attractive enough to catch the attention of young director Roman Polanski. He borrowed her for his “Your Teeth In My Neck.” Once more she wore a wig, a red one. She and Polanski were married shortly afterwards.

The couple decided Sharon must obtain her release from the personal pact with Ransohoff. The payoff was high.

She “bought” her career freedom shortly before she was slain.