The Manson Story: Love and Murder 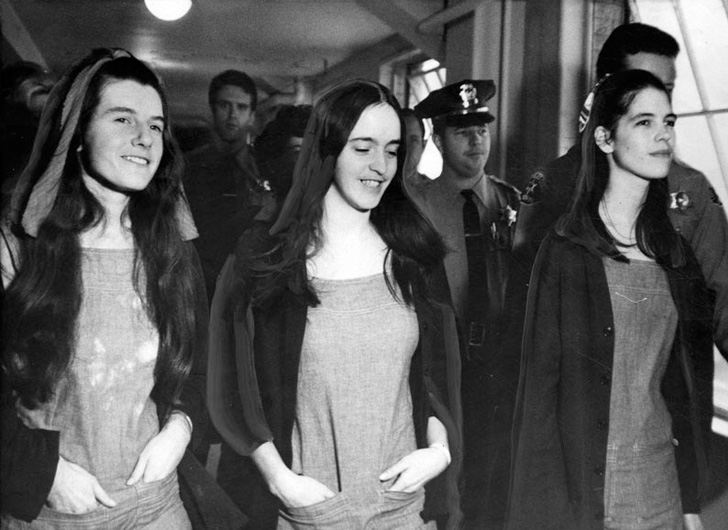 FROM LEFT TO RIGHT: Patricia Krenwinkel, Susan Atkins, and Leslie Van Houten walking to court yesterday, where a Los Angeles jury found them, along with Charles Manson, guilty of first-degree murder and conspiracy for the Tate-LaBianca killings

LOS ANGELES, Jan. 26 – When the story started more than a year ago, a wild-eyed nomad named Charles Milles Manson was brought to the Inyo County Courthouse in buckskins and in chains.

He looked like a frightened, caged animal, his eyes darting from newsman to newsman.

Monday, when the first chapter of his story ended, the same nomad – caged for a year – sat quietly tugging at his beard in a Los Angeles Superior Courtroom to hear a jury rule he masterminded a two-day spree of slaughter which left in its wake seven innocent, helpless victims.

He and his three girl “followers” – Leslie Van Houten, 21, Susan Atkins, 22, and Patricia Krenwinkel, 23 – were found guilty of the Tate-LaBianca murders, seven of the most savage killings in the state’s history.

That same jury of predominantly middle aged, middle-class Americans will decide – beginning Thursday – whether the self-styled guru and his love cult followers will die in San Quentin’s gas chamber or spend the rest of their lives behind prison walls.

“You’ll never live to see that day,” was the bearded leader’s muttered threat to Los Angeles Superior Court Judge Charles Older as he was led to his jail cell.

The threat was as veiled as the prosecution, charges his orders were to the “robots” he sent out to stab and shoot to death five persons at the home of actress Sharon Tate and two at the home of market owner Leno LaBianca.

And there was little doubt in either case what was meant.

In the year that Manson has fought charges that he ordered the brutal murders, things have changed.

In Inyo County he looked frightened…wild …ready to fight his way to freedom.

Monday, he sat stoically stroking his beard, gazing pensively from judge to jury, from ceiling to floor, as he heard his freedom – and perhaps his life – fade.

He no longer wore the fringed leather garb of a hippie, and even his trademark – his beard and long hair, have changed with time.

The one thing that has remained static are his “girls,” who sat near him Monday ready to live or die on his smile.

A year ago they loved him, followed him; the same is true today.

A year ago they would have died for him; the same is true today.

The girls – who some say freely entered his love cult and others charge were snared into it via drugs and a con man’s slick routine – in the true tradition of follow-the-leader said nothing as they heard the 27 verdicts read by a nervous court clerk.

As each day of jury deliberation passed, things were looking better for Manson. The longer the five – woman, seven – man jury took to decide, the more chance there was of a hung jury or even an acquittal.

The long-haired guru’s face showed that he was pleased with more than eight days of deliberations – some 42 hours and 40 minutes – as he entered the courtroom smiling.

But the smile faded. It never returned.

His three dark-haired followers, drab in prison denims, smiled too when they saw their chief walk into court, dapper in a wrinkled white shirt and black ascot. They had not seen each other since Dec. 22 when they were all thrown out of the same courtroom for trying to “talk” to the jury.

The 92-seat courtroom was jammed to capacity with newsmen. Wall-to-wall armed deputies stood in every corner and vacant wall area. The accidental bumping of a briefcase on the counsel table startled the silent room. The footsteps of the jury, walking from the carpeted floor to the stepped-up jury box, was audible in the back row. Some jurors smiled, others were expressionless.

It was an electrifying tenseness when the stonefaced judge asked quietly: “Mr. Tubick, (Herman Tubick the jury foreman) has the jury reached a verdict?”

Tubick, a white-haired mortician, rose to his feet quickly, holding the 27 written verdicts in his hand. “Yes, Your Honor, We have.”

Then the clerk, his hand shaking as he held a microphone to his mouth began reading the verdicts: “We the jury in the above entitled action, find the defendant, Charles Manson, guilty of the crime of murder of Abigail Anne Folger, in violation of Section 187, penal code of California, a felony, as charged in count one of the indictment, and we further find it to be murder of the first degree.”

When the next count was read against Miss Krenwinkel her co-defendant. Susan Atkins, the girl whose initial “confession” lead to the arrests, leaned over to whisper in her ear. Meanwhile. Manson stared down at the counsel table as the lengthy verdicts were read, lifting his eyes occasionally to stare at ‘the jury or gaze at: the ceiling. Slowly the names of all the dead were read:

Sharon Marie Polanski. The 26-year-old daughter of an Army colonel, under her professional name of Sharon Tate became known for her performance in “Valley of the Dolls.” She was married to Polish film director Roman Polanski and was eight-and-a-half months pregnant at the time of her death.

Thomas John Sebring. At one time Miss Tale’s fiance, the 35-year-old karate expert was a lop Hollywood men’s hair stylist who numbered such customers as Frank Sinatra among his clientele.

Woieciech Frvkowski. A friend of Polanski, Frykowski, 37, had worked with him on movies in Europe and came to the United States as a sort of hanger- on. He was a known drug user.

Abigail Anne Folger. A member of the millionaire Folger coffee family, the 26-year-old heiress was a graduate of Radcliff and fiance of Frykowski who came with him to Los Angeles as a houseguest of the Polanskis.

Steve Earl Parent. The 18-year-old son of a carpenter, he was visiting the Polanski caretaker at the time of the murders and became a victim.

Leno A. LaBianca. President and chief stockholder of the Gateway supermarkets, the 41-year-old executive was an avid race fan.

Rosemary LaBianca. Owner of a clothing boutique, the 38-year-old woman was the mother of two teen-aged children.

Then, as the jury filed from the room to again be sequestered until the completion of the penalty phase of the trial, Manson turned to the judge:

“How come we’re still not being allowed to put on a defense? You won’t outlive that, old man!”

It was when the bailiffs, on orders of the judge, escorted Manson past the bench to a holding cell adjacent to the courtroom, that the hippie leader murmured, “You’ll never live to see the day.”

In this same way – a sort of hippie order-by-innuendo – the prosecution charged during the* 30- week trial, that Manson ordered his knife-wielding girl-type killers to “do what Tex (Charles Watson) tells you to do.” What he told Watson to do at the Tate home never was brought out in the trial.

Manson’s path to the Benedict Canyon home of the pregnant actress and his walk up the driveway of the LaBianca home, began when be left Terminal Island’s Federal Prison in 1967.

“Kicking a can” he traveled to the Haight-Ashbury district of San Francisco where one of the original flower children handed him a flower, giving him an insight into “flower power.”

Although Manson took the flower, and the rest the girl offered, it was the power that he relished.

Gathering flowers and girls he built a harem of teeny-boppers whom he piled into a converted school bus and headed for Hollywood and what he felt would be musical success.

His reception in the big city, was phenomenal. He lived with Dennis Wilson, one of the Beach Boys. He palled and partied with celebrities, playing his guitar and philosophizing of love and brotherhood, which all sounded better through the haze of marijuana smoke or the unreality of an LSD trip.

He grew stronger; his “family” grew larger; his philosophy became an obsession.

“The ranch was beautiful,” one of his former followers said, “but Charlie seemed to just flip out and take some of the guys with him.”

Charlie “flipped” out, the prosecution charged, when on Aug. 9, 1969, he gathered four members of his clan around him and sent them out to murder to “back up” his philosophy.

Manson’s philosophy, the prosecution claimed, was that the white people had too long made the blacks subservient, and that the blacks were going to rise and destroy the white population. Only members of the white race left alive, he believed, would be members of his “family” who were to go to the desert and live in a bottomless pit which Manson claimed he had found in Death Valley.

When the blacks discovered they could not handle the reins of government, they would come to Manson’s clan for help, and Manson would then take over control of the country, sending “Blackie back to pick the cotton.”

Prosecutor Vincent Bugliosi told the jury during the lengthy trial that Manson wanted to expedite the black-white race war, which he labeled “Helter Skelter,” and therefore slaughtered rich white people hoping black people would be blamed.

Although this was the primary motive, the prosecutor claimed, a secondary motive – and especially the reason for the onslaught on the Tate home – was Hanson’s rejection by the former occupant of the home, record producer Terry Melcher. Melcher, son of actress Doris Day, had refused to record Manson’s music.

The LaBiancas were selected “at random” after a night of looking for victims by Manson and a carload of followers, Bugliosi said.