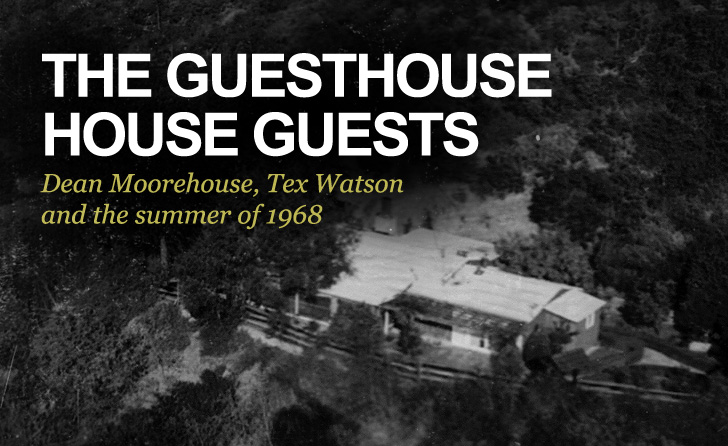 When the pair arrived in Los Angeles, they drove up to a semi-abandoned house on Topanga Lane, where they were greeted by redheaded girl named Lynn Fromme.

“Dean said he was looking for Charlie and she said, ‘Okay,’ and she jumped in the car and she took us to Dennis Wilson’s,” said Poston.

Charlie had become a regular at Dennis Wilson’s Sunset Blvd house ever since the Beach Boys drummer had picked up Manson family members Ella Jo Bailey and Patricia Krenwinkel hitch-hiking.

Moorehouse and Poston eventually move into one of the back houses, taking on the landscaping duties around the property.

“Moorehouse was an ordained minister. He had a great working knowledge of the bible,” said Jakobson. “So Dean could interpret and lend the bible to support Charlie’s philosophy, which he did at all times, because Dean Moorehouse was really a student of the bible.”

Later that June, Dennis Wilson himself was hitch-hiking down Sunset when he was picked up by Charles “Tex” Watson.

“When we got to his house in Pacific Palisades he invited me in,” said Watson. “Rolling up the long driveway to what had once been Will Rogers’s mansion, I played with the idea of what it would be like to tell my brother about the time one of the Beach Boys had me in for coffee.”

Throughout that summer, Watson became a fixture at Wilson’s house, and by August he had moved in.

“[Tex] was like a friendly puppy dog,” said Jakobson. “In the sense that there is nothing a dog wouldn’t do for you, you know; you throw the stick, he’ll go get it. He tried to please.”

At Wilson’s house, Watson became friends with Charlie and the girls. As well as spending a lot of time with Dean Moorehouse, even though the balding minister was twice his age.

“Moorehouse took me on my first acid trip,” remembered Watson. “Now it wasn’t just the external world I saw differently. It seemed the LSD opened me up to what was inside me as well.”

Through Wilson and Jakobson, Tex met Doris Day’s son, television and record producer, Terry Melcher. At the time, Terry was living at 10050 Cielo Drive, a secluded hilltop home in Benedict Canyon. Melcher could remember at least six times Watson had been to his Cielo Drive home that summer.

“Watson was a friend of Wilson’s and Jakobson’s and was often tagging around with either or both of those men,” remembered Melcher, “so often when they would drop by he would be with them.”

By summers end, the party at Dennis Wilson’s Will Rogers house was over. Dennis was going back out on tour and the lease on the house was set to expire. Dennis’ manager told everyone to leave.

In late August, Dean Moorehouse borrowed Terry Melcher’s Jaguar XKE and drove to Ukiah to go on trial for a LSD arrest back in May. Tex had nowhere to go, so he accompanied Moorehouse for the trip up the coast. The trial lasted two days and resulted in a hung jury. Despite objections from the District Attorney, Moorehouse – who showed up to court barefoot – was released on his own recognizance. Tex and Moorehouse spent a few weeks in Mendocino before returning to Los Angeles, showing up at the Spahn Ranch.

“[Charlie] gave us a tent and told us we could stay down by a creek below the ranch itself,” said Watson. “The Family let us eat with them occasionally, and once or twice Charlie and the girls came down to our tent in the evenings and sang.”

After New Years of 1969, Terry Melcher and his girlfriend, actress Candice Bergen, moved out of the house at 10050 Cielo Drive. The property was vacant for a month-and-a-half before Roman Polanski signed the extended lease on February 12th.

For years, many have said Gregg Jakobson arranged for Dean Moorehouse to live in the guesthouse of 10050 Cielo Drive between the time Melcher and the Polanski’s live there. Supposedly, Tex Watson was to have spent much time at Cielo Drive during this time.

But according to Jakobson, it never happened.

But not only did it never happen. It never could’ve. On Tuesday, December 17, 1968, a Mendocino Superior Court jury found the 48-year-old Moorehouse guilty of selling $50 worth of LSD out of his trailer in Redwood Valley. Two weeks later, on Thursday, January 2, 1969 – the day after Melcher moved out of 10050 Cielo Drive – Dean Moorehouse was sent to a California state prison to begin serving his time.

10 Responses to The Guesthouse House Guests